More than 80 residents gathered at the Central Library Tuesday evening to hear city officials and design experts discuss the revitalization of Maverick Plaza at La Villita, which will include three new restaurants.

In contrast to recent gatherings to discuss plans for the Alamo — another significant downtown landmark undergoing changes — this meeting was not marked by shouts or arguments. Instead, attendees listened intently, occasionally whispering among themselves.

"La Villita is our backyard," said Sylvia S. Mireles, who attended with her husband. Mireles, a Lavaca neighborhood resident, often walks from her home to Maverick Plaza. "I only wish there were more people here. This is important."

The plaza's $7.6 million culinary revitalization, led by Chef Johnny Hernandez of Grupo La Gloria, will include a Mexican restaurant from Hernandez, a restaurant with indigenous and Spanish influences from chef Elizabeth Johnson of Pharm Table and a German-style beer garden from chef Steve McHugh of Cured.

Outside of popular annual events like Fiesta's Night in Old San Antonio, Maverick Plaza has never been a destination for locals, Hernandez told the crowd. Inspired by the busy plazas of Mexico, the restaurateur said he wanted to build on deep cultural and historic connections in Maverick Plaza while bringing new excitement to the location.

“It’s a plaza that’s full of life, entertainment, music and culture — and that’s what I want to see La Villita turn into 365 days a year,” Hernandez said. 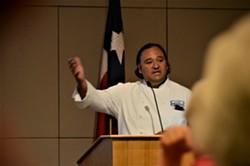 Site investigation, including archaeological research, is expected to continue through the summer, while MP Studio and Fisher Heck Architects are expected to complete plaza designs in the fall.

Major construction will begin sometime in 2020, with the plaza scheduled to reopen, along with the three new restaurants, in 2021.

Despite the plaza's closure, the rest of La Villita — including its shops and restaurants — will remain open to the public.

Residents at Tuesday's meeting were invited to review and rate potential designs for the plaza — including water features, shade, wayfinding, paving, seating, plants, lighting and food — to improve the overall plaza experience for residents and tourists year-round. The City and GLG will work together to develop culinary programming.

Other plaza updates will include an outdoor demonstration kitchen, food and retail kiosks, expanded parking along the north side of Nueva Street and the removal of a non-historic concessions stand, restroom and walls.

Results from the public meeting, additional plaza plans and future public meeting dates will be made available at the City's Transportation and Capital Improvements Department website.