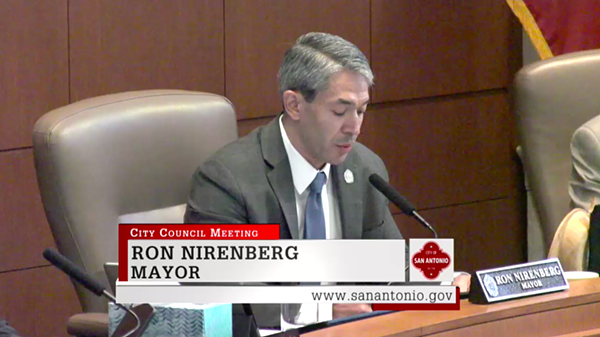 City council moved unanimously Thursday to add the local fire union's three proposed charter amendments to the November ballot. It also voted, 9-2, to approve an ordinance that would require most employers in San Antonio to offer paid sick time to workers.

The controversial charter amendments and the new sick time rule were results of separate petition drives aimed at placing both before voters November 6.

Adoption of the sick time ordinance, sought by a coalition of community activists and labor groups, means that measure won't need to go onto the ballot at the same time as the proposed charter changes. City leaders have fretted that voters drawn by the sick time referendum might also support the firefighters' proposals.

Council voted to push forward the fire union's proposed charter amendments — largely viewed as a punitive effort by the firefighters over stalled contract negotiations — with no debate from the dais. Mayor Ron Nirenberg repeatedly referred to the vote on the proposed amendments as council performing its “ministerial” duties.

The move sets the stage for a public vote on changes he and other city leaders have repeatedly decried as disastrous for the city.

The first of the proposed amendments relaxes the City's referendum requirements, potentially stymieing the ability to pass ordinances without a costly public vote. The second would cap how much city managers who follow Sheryl Sculley can earn and limits their terms to eight years. The last would force the city to resolve labor contract disputes in arbitration instead of court.

The San Antonio Professional Firefighters Association has couched its proposed changes as a way to put power back into citizens' hands.

However, prior to council's vote, St. Mary's University economist Steve Nivin warned the alterations would ultimately shake confidence in city government, stifle economic development and drain public coffers. He estimated they would have an economic impact of $382.3 million to $4.2 billion over the next 20 years.

In contrast to the stoic vote on the proposed charter changes, council members gave spirited statements about their support or opposition to the paid sick leave measure, which would go into effect Jan. 1.

Councilman Manny Pelaez, a labor attorney, cast doubt whether it would stand up in court, and Nirenberg questioned whether the state legislature could supersede the ordinance when it meets next year. However, he said that by adopting the ordinance now, the city could hold further discussions to iron out potential snags before it's implemented.

"By passing the ordinance today, we can begin the process of bringing businesses and stakeholders together with the community," Nirenberg said. "That's the San Antonio way."

Councilman Clayton Perry, who voted against the ordinance, pointedly asked why the city hadn't run numbers on its economic impact, especially after hiring to estimate the cost of the Firefighters' proposed amendments.

"I would think my colleagues would want to know what the impacts of this are going to be," he said. "What are the cost impacts?"

After the measure passed, supporters erupted in cheers and whoops. Nirenberg requested that they quiet down so council could continue with the rest of its agenda.

For a deeper dive on these ballot measures, see Current editor Greg Jefferson's recent analysis of how they've got city officials shaking.