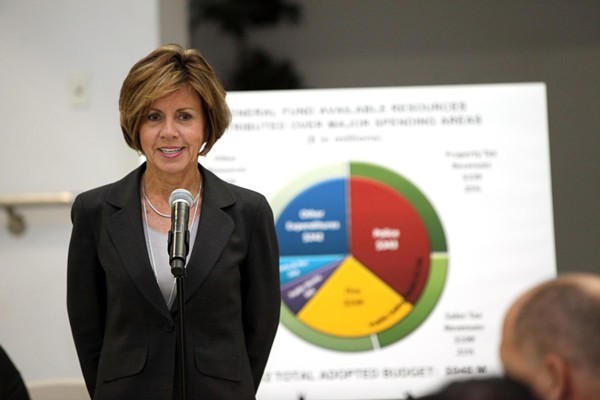 City Council approved the new contract on an 8-3 vote. The three council members to vote against the ordinance were Cris Medina, Shirley Gonzales and Ray Lopez.

Medina and Lopez were concerned over the performance metrics used to evaluate whether Sculley would receive a $100,000 bonus. Medina floated a proposal to define the specifics of such metrics, but it didn't gain traction. Mayor Ivy Taylor told the rest of the council that each of them would have input on the performance measures for Sculley's bonus.

Gonzales' District 5 encompasses much of the West Side and some of the South Side. She questioned the budget process, particularly how it might mask deferred maintenance for infrastructure projects and prevent older parts of town from catching up, maintenance-wise.

“My community is not being fairly given portions of the budget. So I'm hoping that could be something we work on together,” Gonzales said to Sculley.

But most of the council members gushed praise for Sculley, lauding her for running a tight fiscal ship and for assembling a capable team to support her.

This is the fifth time that Sculley's contract has been amended since she's been in San Antonio. The contract will make her the current highest paid city manager in Texas, surpassing A.C. Gonzalez of Dallas, who makes $400,000 per year.