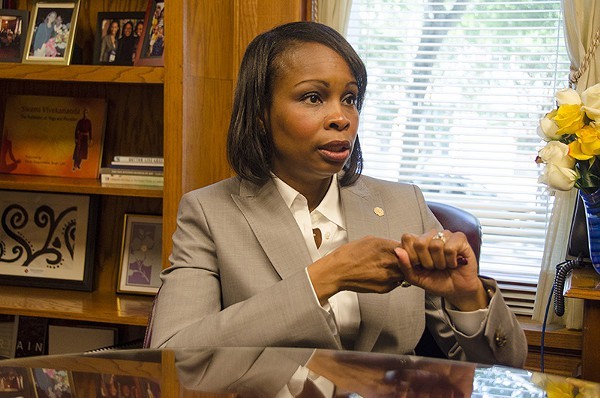 The conflict stems from Taylor’s ability to appoint commissioners to SAHA and that her husband Rodney Taylor, a landlord, owns several properties that are subsidized by the agency. Rodney Taylor has received over $430,000 in rent subsidies since January 2010, according to a June San Antonio Express-News report.

The conflict of interest violates federal regulations which bar elected officials from having an interest in subsidized housing, which Taylor had since becoming interim mayor in July 2014. She told the Express-News in June that she was unaware of such regulations.

But any complaints made to the city’s Ethics Review Board about the conflict of interest are now null and void, thanks to the newly passed ordinance. Taylor said in a written statement that the her proposal was an effort to be more transparent.

“This ordinance will make it clear that any conflict, which may have existed during a very narrow window in the past, will be waived,” Taylor said in a written statement. “At my request and in the spirit of transparency, this will allow us to move forward with the important work between the city and SAHA without any lingering issues.”

Taylor has denied any real wrongdoing, chalking any conflict up to an unintentional oversight.

Most of the City Council members capitulated. Councilmen Rey Saldana and Ron Nirenberg were the two members who voted against the ordinance. Taylor did not vote.

City Attorney Martha Sepeda said that people would still be able to file complaints about Taylor’s conflict to the Ethics Review Board. But it’s unclear whether those complaints would carry any weight, given today’s vote. A call for clarification to the City Clerk has not yet been answered.