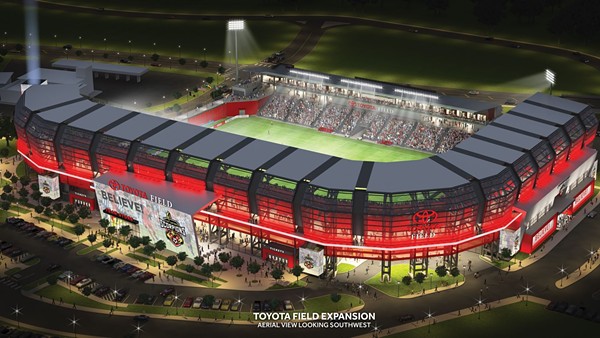 But if the nation's premier soccer league does grant the Alamo City a franchise in the future, an announcement made today by Mayor Ivy Taylor and Bexar County Judge Nelson Wolff will have played a key role.

The deal will become official once if approved by City Council and the Commissioner’s Court next week.

There are still plenty of hurdles between San Antonio and the highest level of domestic soccer. San Antonio will have to convince MLS that it fits the criteria to host a franchise. And it will have to beat out other cities vying for a team, including Sacramento and St. Louis. MLS will grow to 24 teams in the near future, as it adds clubs in Miami, Minnesota, Los Angeles and Atlanta to the 20 current franchises.

In order for San Antonio to get in on the next round of growth, the 8,000-seat Toyota field will have to enlarge its capacity at some point. It is designed to accommodate expansion of over 18,000 seats. And MLS requires a $100 million expansion fee for all new clubs.

MLS was non-committal about the news. The league sent out this statement today after the press conference:

"San Antonio city and Bexar County officials announced that they have reached an agreement to purchase Toyota Stadium and are interested in partnering with Spurs Sports & Entertainment to bring Major League Soccer to San Antonio in the future. We sincerely appreciate this strong demonstration of interest in MLS. As we announced in March, MLS has not yet determined the timing and process of expansion beyond 24 clubs, but look forward to learning more about this project once our future expansion plans are finalized."