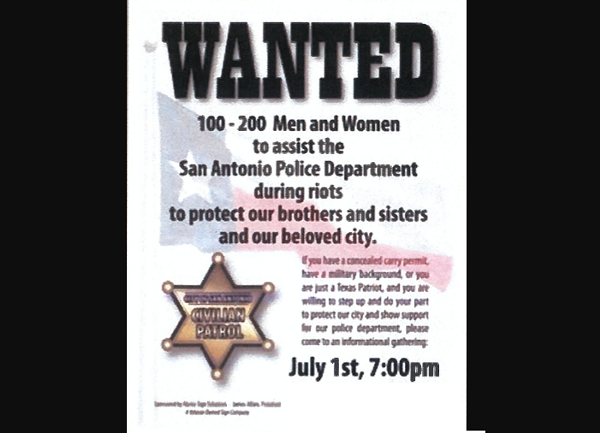 San Antonio officials have ordered a local businessman to stop his efforts to recruit an unauthorized civilian force to assist police "during riots."

On Monday, the city issued a cease-and-desist order to James Alfaro, owner of Alamo Sign Solutions, saying a poster he created to assemble a patrol of up 200 "Texas patriots" makes misleading claims that he's working with SAPD. It also warns that he could face legal action.

"During a time when our residents are speaking up for changes in policing, flyers like these only seek to stoke controversy," City Manager Erik Walsh said in a written statement. "We do not endorse these actions and I hope this individual will finally cease these harmful actions."

Alfaro was unavailable for comment via his sign business, and the number on the poster rang to a full voicemail box.

The recruitment poster was circulated as San Antonio residents march for racial justice in the wake of the police killing of George Floyd. While several people were arrested for rioting downtown during the late May start of the protests, the majority of local demonstrations have been peaceful.

Alfaro's poster, which features both a Texas flag and a badge, advertises for people with concealed carry permits, military backgrounds and a desire to “protect our city and show support for our police department.”

"This poster has no affiliation whatsoever with the City of San Antonio nor the men and women who wear the San Antonio Police uniform," San Antonio Police Chief William McManus said in a written statement. "We once again ask that he remove any reference to SAPD from his materials."