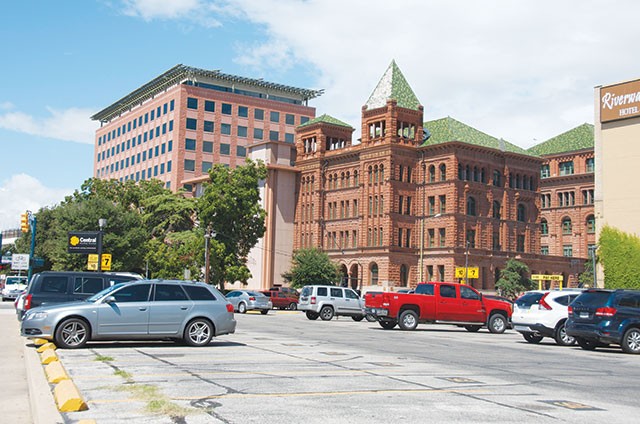 Once or twice a year, I take a group of University of Texas at San Antonio graduate students on a little walk starting from our downtown campus. We cross Bill Miller Plaza, go down the “front steps” of the campus to Nueva Street, and then walk east, toward the heart of downtown San Antonio.

It’s an interesting and enlightening walk, if not necessarily a very pleasant one. There’s the dark cavern of the parking lots under the highway, the shuttered Texace golf cap factory, a parking lot surrounded by a barbed wire-topped fence and across the street, the asphalt of a parking lot surrounding a bleak-looking single story office building. Then there’s a La Quinta hotel, surrounded by more parking lot, yet another sea of parking lot asphalt around another office building and the gleaming new Public Safety headquarters (replacing a failed K-Mart). Santa Rosa Street is usually a roaring sea of multi-lane traffic, so it’s a turn north to get to Market Street, and then Produce Row, the Mercado, and whatever A&M is calling what used to be the Museo Alameda.

It is a bleak, uninviting pedestrian environment, more unused and underused space than urban core, with almost no other walkers to be seen. The City—or rather what passed for San Antonio’s business and political leadership then—built this sad and desolate urban environment, beginning some 50 years ago. Their aim, with the “Central West Area Urban Renewal Project,” was to wipe out much of SA’s more checkered history, bulldozing what remained of the red light district and much of the Mexican-owned and -patronized retail quarter.

The aim of the Good Government League-controlled city government was to reshape the physical form of downtown. That they achieved. But they also achieved great swaths of underdeveloped land. It is this land, south and west of Main Plaza (along with the HemisFair area) that will ostensibly benefit from the ability of the proposed streetcar to “spur development” and create “synergy.” That’s a promise we’ve heard before in San Antonio, about a host of public development schemes including the Alamodome, convention center expansion, Rivercenter Mall development and river extension, to say nothing of the failed Fiesta Plaza development.

The real problem that my students see up close, and that plagues much of the downtown area of San Antonio, is its remarkably spread-out and dispersed character. Just a block or two from the vibrant River Walk there are usually a host of “For Lease” signs and underused space. Walk a little more, and you’ll see that singular indicator of too much space and too little economic value, the surface parking lot. The problem of a “spread-out” downtown area is by no means unique to San Antonio. It was evident to Chicago’s planners and business leaders in the 1940s and ’50s. Chicago planning director and later planning consultant Frederick “Ted” Aschman observed in 1957 that “Business districts have a tendency to spread out over a period of time as new or expanding businesses build on cheaper peripheral land rather than rebuild in the existing concentrations of higher-priced property.” Aschman went on, “This often destroys the compactness which is one of the greatest assets of a regional commercial district.”

Aschman’s recommendation was the development of “anchor projects” which would “confine future commercial development to the existing core,” further containing strong employment and economic activity in the central area, as “new commercial building would be built in closer (and thus more convenient and efficient) relationship to existing buildings and to each other.” What Aschman sought for Chicago’s Loop, and what that city ultimately achieved, was a dense, high-rise concentration of office buildings and employment. Transportation played a role—the Loop was well served with an elevated transit system, a subway and commuter rail—but it was policies that supported dense development that kept Chicago’s core vibrant and functional.

What we need for San Antonio is a public and private commitment to a dense downtown core, and local plans and policies that support that goal. What we’re doing is almost the opposite. Development is spreading out, to just that “cheaper peripheral land” that Aschman described. New housing at Pearl Brewery and along Broadway may be more attractive than abandoned car dealerships, but it won’t aid the development of a dense, walkable core. New housing along South Flores or at the Big Tex site south of King William will just mean more spread-out development. And even the promise of a new school of osteopathic medicine near Fox Tech is just too little, too far. Take, for example, the Loop district Aschman helped create. It’s 1.58 square miles total. Now think of walking from the Pearl to Main Plaza, that’s 2 linear miles in itself, through a long stretch of Broadway desolation. Blue Star fares a bit better, that would be a 1.3 mile hike down the pleasant River Walk (you could also take Main Street as a surface road alternative, though this will be hampered if HEB succeeds in closing a portion of that street to pedestrians). Residents and businesses on Flores Street, while closer in, suffer in the walkability department south of Cesar Chavez Boulevard.

VIA’s proposed streetcar system isn’t an answer to our downtown spread—just the opposite. The chosen route that twists and turns to accommodate everyone and everything, from Market Square and the new transit hub on the West Side to HemisFair Park, from Pearl Brewery to Southtown and the Tobin performing arts center, may well help some favored interests and developers make profit out of promises. But it will just exacerbate our local version of the problem Ted Aschman sought to fix in Chicago.