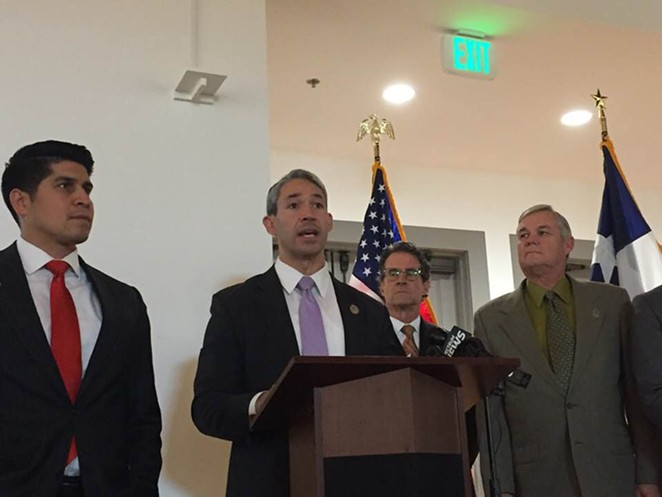 The City of San Antonio has reached a deal that would require the area's dominant outdoor advertising company to take down a quarter of all billboard signs in the city.

In exchange, San Antonio-based Clear Channel Outdoor would be allowed to add new digital displays to the flipside of 11 of its existing outdoor digital signs.

The company has agreed to take down 11 large-size billboards, 49 mid-sized ones and all 265 smaller signs — referred to as junior structures — for a total of 511 removed displays on 297 sign structures.

"We're excited to see some clutter removed from our scenery and our skyline over the next couple of months," said Mayor Ron Nirenberg, flanked by seven of ten members of city council at a news conference announcing the proposed swap.

Greg Brockhouse, who is running against Nirenberg in the May election, was notably absent.

Under the agreement, Clear Channel would have 18 months to take down its signs and would pay for removal out of its own pocket. The signs slated for removal are spread more-or-less equally between council districts.

To consummate its deal, however, the city must update the existing sign ordinance to allow Clear Channel to add the new digital displays. That means officials will need to spend the next month or so seeking input from its sign committee and from the public via the SA Speak Up online portal.

Nirenberg said he expects citizens to comment on the signs businesses display on their premises, but added that the Clear Channel deal doesn't affect that type of advertising.

The last revision of the sign ordinance came 10 years ago when Clear Channel agreed to take down 83 conventional billboards so it could erect its 12 digital displays.

"As time goes by everything gets more expensive," said Tim Anderson, a vice president with Clear Channel, explaining the larger number of removals required under the new deal.