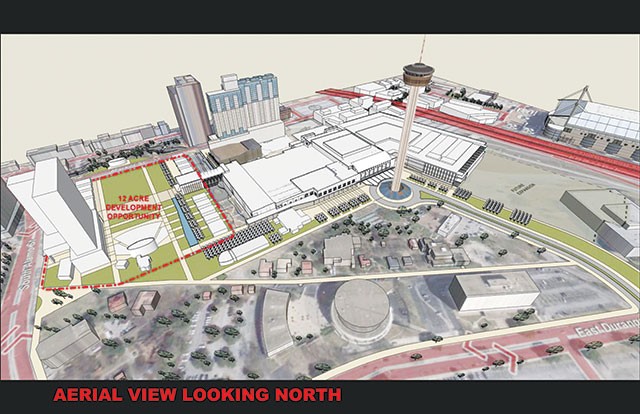 Just one more hotel, and the city will boom. That has long been the mantra of this city’s business and political leaders. With her decision to support a new hotel tower atop the Joske’s building, City Manager Sheryl Sculley has now joined the crowd, fully backed by newly reelected Mayor Julián Castro.

There was the Hyatt Regency hotel in 1981, enhanced with some $10 million in Federal aid dollars, with the promise that a direct connection between the River Walk and Alamo Plaza — the Paseo del Alamo — would boost the fortunes of Alamo Plaza and help revive downtown. Then there was another major Federal government grant for Rivercenter and the new Marriott Rivercenter hotel. That was supposed to transform downtown as a retail center by adding two new high-end department stores to the existing Joske’s/Dillard’s building.

Then in 1995 came a City and County tax abatement for the Adam’s Mark (now Crowne Plaza hotel), followed by yet another 10-year tax abatement deal for Hixon Properties’ Westin hotel. There were tax abatement deals for the Hyatt Hill Country and the Westin La Cantera as well.

For a decade, the City pursued what the late Carlos Guerra called the “Mother of All Hotel Giveaways” to get the 1,000-room convention center headquarters hotel, the hotel that was supposed to vault San Antonio to the top rank of convention destinations. When the promise of a tax abatement giveaway failed to lure any private hotel developer, the City ended up financing the Grand Hyatt itself, guaranteeing $208 million in bonds with citywide hotel tax revenues.

Let’s also not forget the “PGA Village” deal that led to the J. W. Marriott Hill Country resort hotel, the one Marty Wender, then chair of the Greater San Antonio Chamber of Commerce, termed “a tremendous economic generator,” one that would “attract attention to San Antonio from around the country” and put us among the top ranks of golf destinations.

Each of those hotel deals ultimately happened, greased by a political process that seemed amenable to every promise from every developer, always accompanied by grand promises of jobs and economic riches to come. The count of hotel rooms in San Antonio has grown from 18,600 in 1987 to 27,500 in 2000, and then to 44,310 in 2012. So it seems appropriate, as the mayor and city manager endorse yet another hotel project, one that will tower high over Alamo Plaza, to ask what we’ve ended up getting for all those deals, all those subsidies, all those promises.

The constant big promise is that those new hotels downtown will boost the city’s convention prominence and generate a rebirth for our ailing core. That promise was most overt in the case made for the Grand Hyatt. The City’s consultant for the proposed hotel, HVS International, reported the number of hotel rooms filled (room nights) by conventions in 2001 was 712,189. They forecast that the addition of the Hyatt would boost the room nights produced by the Henry B. Gonzalez Convention Center by 150,000 additional room nights. So, how’d we do?

The simple answer is, not well. After the Hyatt opened in 2008, the city saw slightly more than 736,000 convention room nights in 2010. But the number dropped to 637,593 in 2011, and 635,829 in 2012. The lingering effects of the recession certainly have made a difference. Yet the reality is that San Antonio is now seeing decidedly fewer convention room nights than the 724,882 it garnered in 1998 — before the opening of the last convention center expansion, before the “revitalization” of Houston Street, before the extension of the River Walk, and yes, before the Grand Hyatt.

And how did the City’s downtown planning consultants see the impact of this great boom in hotel development? The official word from the HR&A consulting firm in the “Center City Strategic Framework Plan” from December 2011 is that “downtown has experienced an imbalance of uses: hotels and visitor-centric retail are now the dominant businesses, not only in the immediate core of downtown, but also along many of the area’s major corridors.” HR&A went on to recommend that “creating a framework that allows other sectors of real estate to prosper, especially residential, will re-center the balance of residents to visitors and local-serving businesses to visitor-catering hospitality.” That means we don’t really want or need more hotels downtown if our real goal is a healthy, vibrant core.

We’re left with the question: why put a 26-story hotel tower atop Joske’s, a sensitive site adjacent to Alamo Plaza? Is it really to give downtown a “shot in the arm” as one local developer suggested, or according to Ben Brewer of the Downtown Alliance, to avoid sending a “negative message.” Nope, that’s not it. It’s really about desperately trying to accommodate yet another out-of-town developer, and attempting to aid the fortunes of a failing downtown mall, while supporting the legion of present and former city staffers and lobbyists dedicated to making development deals “work” even as they threaten our most valued sites. And as the “deal” to make two prime sites of HemisFair Plaza available for new private development — that almost certainly translates to “hotel” — at the corner of Alamo and Market Streets moves ahead in the state legislature, look for even more grand rhetoric and promises for one (or two) more hotels.