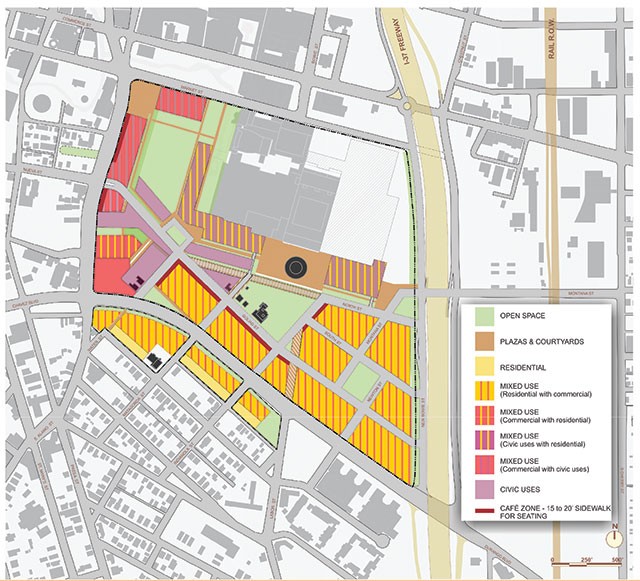 “National retailers like Barnes & Noble and Bath and Body Works”

Our politicians have a wonderful way with words here in SA. Things they — or the local business folk — want are often packaged and sold with words that don’t make clear what they are, or what we’re buying. Take the case of the “Regional Economic Generator.” That was the official designation of the Alamodome in the state legislation that allowed VIA to use a part of its taxing authority to build the dome: a 65,000 seat football stadium for a city that didn’t have an NFL team, and realistically had no prospects of getting one.

When it came time to sell that football dome to the area’s voters, then-Mayor Henry Cisneros’ pollster, George Shipley, found that a football stadium was not a sure thing among women. And so the dome was transformed into a “MULTIPURPOSE CONVENTION AND sports FACILITY.” It wasn’t really about football at all, we were assured by no less than Edith McAllister, wife of former Mayor W. W. McAllister. It would house, we were promised, oodles of conventions and convention visitors, lots of community events, and even allow us to accommodate Olympic ice skating on the two rinks built into the dome’s floor.

We did accommodate a US Olympic Festival shortly after the dome’s grand opening. The next year the Olympic Festival moved to St. Louis, and their new dome. And then the US Olympic Festival died, never to be held again. Some folks argue that the Alamodome made us a “big league” city. But exactly what “league” isn’t clear. It did land at number seven on bleacherreport.com’s list of the “25 Dumbest Stadiums Ever Built,” which is a distinction of a sort.

Then there was “National retailers like Barnes & Noble and Bath and Body Works.” Not in La Cantera, or Northstar Mall. They were the words of John Tschiderer, vice president of development for Federal Realty, announcing his firm’s vision for the future of Houston Street downtown in 2001. Walk up and down Houston Street today. There’s a Hotel Valencia, a new Walgreen’s, and some new restaurants of variable success. But a string of national retailers, or just one Barnes & Noble bookstore? Nope, didn’t happen.

The words were really sales pitches, sometimes aimed at us from our political “leaders,” sometimes from an out-of-town developer to a set of politicos, city staffers, and business people, who were eager to get something when the real words wouldn’t work. The words were meant to be obscure and unclear. They left plenty of wiggle room for the politicians pitching to their constituents.

Which brings us to the matter of the “full-service boutique hotel.” That would be the “boutique hotel” very quietly mentioned on page 42 of the HemisFair Park redevelopment master plan, where it says “A full-service boutique hotel introduced on the site could take advantage of synergies with the Convention Center, and provide enhanced visitation to the site, supporting its retail and other program elements.” The plan does go on to suggest “limiting the size” of the proposed hotel. But nowhere does it define “boutique” or provide any sense of how big a hotel — in terms of number of rooms or height — is envisioned. Nor does it make clear if that means one, and only one, hotel, or maybe two hotels, or more.

That portion of the plan document with the site development plans and potential height limits isn’t much help either. The site plan identifies a whole host of locations with the designation “New Mixed Use.” And for the key development sites at the corner of Market and Alamo Streets, the sites that sit atop proposed underground parking, the defined use is “commercial with civic uses.”

There have been lots of shenanigans in Austin over the proposal to deny San Antonio voters any direct say in the redevelopment of HemisFair, justified by lots of pious comments about development flexibility and financial support for the proposed park area. Now is the time for the HemisFair word games to stop. Concerned citizens have an opportunity to attend a June 11 HemisFair workshop focusing on what’s now called the “civic park;” supposedly the first in a series of public meetings concerning the programming and design of the space. Registration, however, closed Monday. Let’s hope someone inquires about the presence of a “Full-Service Boutique Hotel,” including a maximum room count and a height limit, ensuring that HemisFair becomes truly a civic park, and not a vehicle for enriching one or another privileged developer.