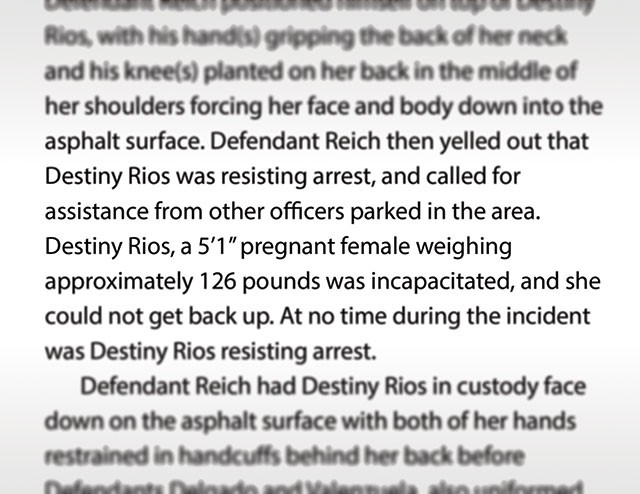 A little more than two years ago, as Texans were celebrating the Fourth of July, Destiny Annmarie Rios was walking to her grandmother’s house on Culebra Road. A police officer stopped her near 27th Street just before 6 p.m.

Rios asked San Antonio Police Department Officer Travis Reich why she was being stopped. Reich allegedly told her that he was authorized to stop anyone found in that Westside neighborhood.

Reich initially let Rios go, but when he discovered she had a warrant for prostitution, he caught up with her and the stop took a turn for the worse. A YouTube video captured by a resident shows Rios on the ground, in handcuffs, with three officers on top of her, while at least one punches her multiple times as she screams in agony and tells police that she is pregnant.

Rios was arrested, booked and charged with prostitution and resisting arrest. In addition to other injuries, she suffered a miscarriage, but she was never convicted of any crime connected to that arrest.

So how did a walk down the street result in a beating and an arrest?

According to the lawsuit, Rios was walking away from Reich when he grabbed her by the back of her neck, twisted her arms behind her back and handcuffed her.

“When Destiny Rios turned her head to ask Defendant Reich about the reason for her arrest, Defendant Reich violently threw Destiny Rios face down to the ground. Defendant Reich positioned himself on top of Destiny Rios, with his hand(s) gripping the back of her neck and his knee(s) planted on her back in the middle of her shoulders forcing her face and body down into the asphalt surface,” the lawsuit alleges.

This part of the narrative is not in the public video footage.

The lawsuit claims Reich shouted “resisting arrest,” and officers Delgado and Valenzuela—who presumably were nearby on patrol or en route anyway—showed up to the party.

Rios, who stands just over five feet, weighed 126 pounds at the time. Her attorney says she was not resisting arrest. That charge was ultimately dismissed, along with the prostitution charge.

Naturally, the police deny the allegations.

In the SAPD’s answer to the complaint, the department claims official immunity and argues that the officers used reasonable force. Would you believe us if we told you the police also claim that on July 4, 2012, they thought Rios was reaching for a weapon?

“Plaintiff’s refusal to follow Defendants’ lawful commands, including, but not limited by specific enumeration to her physically resisting the officers lawful attempts to handcuff her after she had been advised she had an outstanding warrant for prostitution, her actions in repeatedly concealing her hands under her body and leading the officers to believe she may have a weapon or be attempting to hide evidence,” the SAPD’s response states.

Caldarola said, to her knowledge, Rios did not have a weapon, and that the decision to drop the charges suggests there was no evidence or insufficient evidence of a crime.

The police also claim that Rios’ mental and physical pain was caused by substance abuse and mental disorders, not police brutality. The City and SAPD’s affirmative defense arguments do not address the miscarriage.

The City of San Antonio also denies most of Rios’ allegations and suggests Rios had it coming.

The City’s answer states in part: “Defendant would show that the disabilities and/or damages, if any, which Plaintiff now has, are primarily the result of her own actions, inactions, or negligence. Plaintiff’s actions or inactions, said acts being illegal and intentional, were the sole proximate cause, or contributed to proximately cause, the incident in question and/or Plaintiff’s alleged damages.”

So why were the charges dropped?