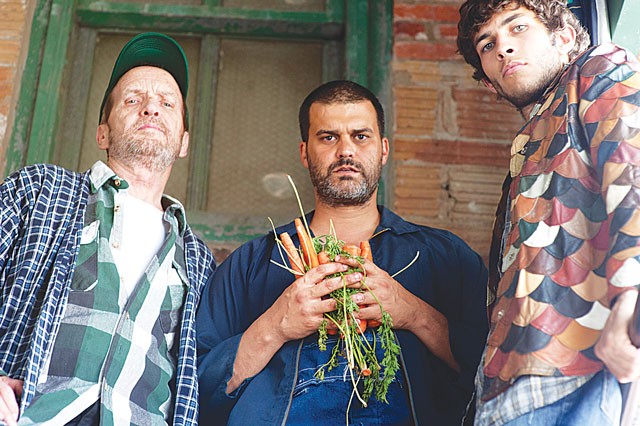 Life, or a Reasonable Approximation Thereof

The Classic Theatre opens its fourth season with the Pulitzer Prize-winning Buried Child, Sam Shepard’s creepy take on Midwestern repression: it’s like woodworms feasting on American Gothic. Featuring a generous assortment of Flamboyant Literary Symbols — the title might as well shoot sparks — Buried Child ultimately detonates the nuclear family. And like much of Shepard, the play relies less on strict plotting than on ever-more-complex layers of association and disjunction: it’s a prose poem of generation and sterility, of Illinois nightmares and California dreamin’, of miraculous harvests and the grimmest of reaping. In a refreshing development, the production is helmed by newcomer Stefan Novinski, professor of drama at the University of Dallas; as a non-resident of Bexar County, he is of course automatically and senselessly disqualified for an Alamo Theatre Arts Council Globe Award for direction. (Welcome to San Antonio theater, Mr. Novinski. Please come back anyway.)

The evening begins haltingly, with a long and static dialogue between ailing couch potato Dodge (John O’Neill) and housewife Halie (Rita Crosby), whose offstage voice occasionally does battle with the pit-a-pat of Rick Malone’s rain-swept sound design. (Yes, this makes the first scene look and feel like heartland Beckett — an immobile protagonist, a disembodied voice — but [lord!] is it slow. Bury the child, not the dramatic interest.) Things perk up considerably with the entrance of troubled son Tilden, who’s been digging up Dissertation Topics in the backyard; he begins with Native American maize — a tip of the hat to post-colonial studies, here — and eventually investigates phallic carrots (a shout-out now to gender studies). Anthony Ciaravino, almost unrecognizable, gives the ensemble’s strongest performance as this haunted, and haunting, man-child. There’s more than just veggies lying around the yard, however, and as further characters take the stage — including John Minton’s aggressive Bradley and the impossibly wholesome duo of grandson Vince (Rodman Bolek) and fiancée Shelly (Kat Connor) — it looks less and less likely that a certain family secret will remain good and buried.

Look: Shepard is nearly impossible to pull off — he’s naturalistic in form but surreal in particulars, and to strike the proper balance is a guessing game. In my mind, the Classic Theatre relies too much on naturalism: very little is made of lighting or scenic effects and the ensemble generally plays the piece as a kitchen-sink drama. (A kitchen sink full of maggots, but a sink nonetheless.) This ultimately leaves the actors with very little wiggle room: As the play grows more and more poetic — a virtual oratorio of decay and disillusion — the actors seem to fight against the weirdness of text instead of reveling in its glorious strangeness. (With Buried Child, you might as well go for broke.) There are still moments of great power — the endings to acts two and three are among the most memorable in American theater — but it’s telling, too, that both scenes rely on visual surprises, not lyric ones. So this production’s three acts are a mixed bag: It’s a slow burn to the concluding parade of horrors, but there are pleasures (and legumes) unearthed along the way.

Next door, the Overtime serves up its own strange brew with Michael D. Burger’s “sci-fi dramedy” Life, or a Reasonable Approximation Thereof. The play starts off with a solid, Twilight Zone-ish conceit: An ordinary twentysomething discovers that his “life” is, in fact, an endlessly repeating single day, and that even minor alterations generate radical changes in this “life’s” trajectory. But whereas Twilight Zone episodes are models of narrative economy — 24 minutes of perfect pacing — Burger’s sluggish script meanders for two hours before finally expiring. When the playwright concentrates on the sci-fi basis of his drama — as when protagonist John anticipates the responses of every character in the room — there’s some fun to be had. Far too often, however, Burger overreaches and allows the action to bog down in clichéd and uninvolving conversations between friends and romantic interests. Joshua Thomas is fine as the increasingly erratic John (a cipher, one supposes, for the author himself); the four members of the supporting cast contribute various levels of over- and under-acting. Director Bryan Ortiz struggles to move the plot along, particularly in its more metaphysical passages; Rigel Nuñez’s attractive living room set is full of in-jokes that ought to appeal to Overtime regulars. (Check out the faux movie poster, for instance.)

One wants to support new work, but clearly the Overtime should have insisted that Burger’s Life be pared into a far sleeker one-act play — or at least a reasonable approximation thereof. •