Clear Those Sinuses Up With Attagirl’s Hot Chicken 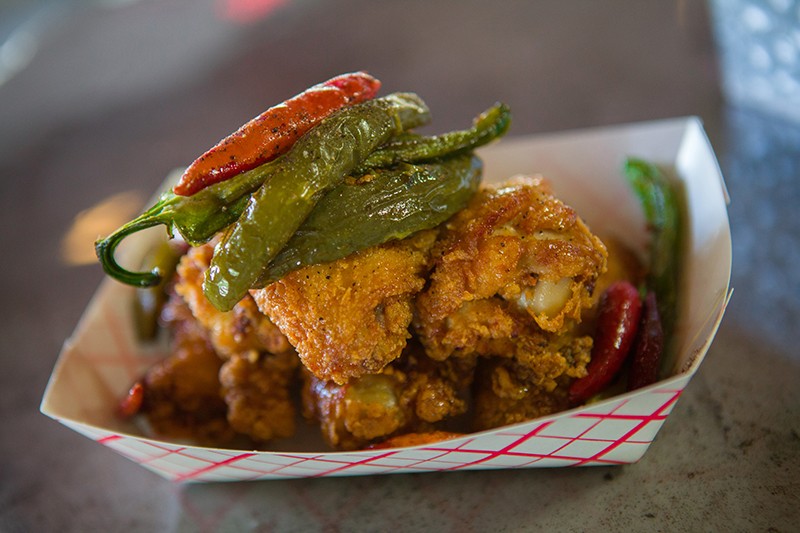 After more than two months of opening its just-so remodeled doors, Cullum's Attagirl (726 E. Mistletoe Ave.) still doesn't have much signage. Sure, there's a paper cutout of the eatery's mascot, Ellie, a sassy gal with crispy drumsticks for legs, but otherwise there's not much that sets this corner establishment apart.

So much so that it's often mistaken for the neighboring restaurant, The Cookhouse. No less than three people, including UTSA President, Ricardo Romo, wandered in and out of Attagirl actually looking for a New Orleans kitchen and finding hot chicken instead.

Though most made their way to their original destination, some ended up back at Attagirl later for a drink inside the former location of Willard's Jamaican Jerk. Opened by Chris Cullum (responsible for Cullum's Attaboy and now Tuckers — can we call him a magnate yet?), Attagirl serves up a tight menu and a revolving line up of draft and canned craft brews. Tight, in this case, meaning there are three regular items and a special or two written on the smallest chalkboard in the land.

So if you're looking for steak or fish or something vegetarian, you're out of luck at Attagirl. But this spot should be on your must-list if the craving for Southern-style fried chicken strikes come evening time (coming soon: waffles for brunch). Fans of heat can clear their sinuses with the Nashville-style hot chicken wings. Brined in buttermilk for up to two days, the drumettes are then dredged in Attagirl's signature Southern-style spices and a helping of a thick cayenne paste.

It's BYOR (bring your own ranch) or else ask for a bit of honey to help lessen that capsaicin kick to the face. Wash it down with Epic Brewing Company's Hopulent IPA, as recommended by creative head/power janitor Mauricio Gudiño. And the tiny graham cracker-crusted chocolate pie is a good closer.

Not afraid to stretch the limits of what diners are ready to try, Cullum and company dabble in fun specials created by the company's rotating chefs. Spam fans will enjoy the fried chicken bologna sandwich with pickles, pimentos, mayonnaise and lightly-toasted white bread. A chicken pate with chow-chow relish was an off-menu hit a few weeks back, as were the smoked wings doused with a spicy sauce made with Cedar Creek Brewery's Dankosaurus American IPA.

And when they're not incorporated into the menu, the brews are highlighting fruity and funky flavors. A pineapple cider has turned into a mainstay, though though some beers will have to go if they plan to add four Southerleigh brews in the next few days.

Though a "real" kitchen was originally in the works, the hot chicken house is doing just swell with its tabletop fryer and upcoming growler program. The new L-shaped patio doesn't hurt either.