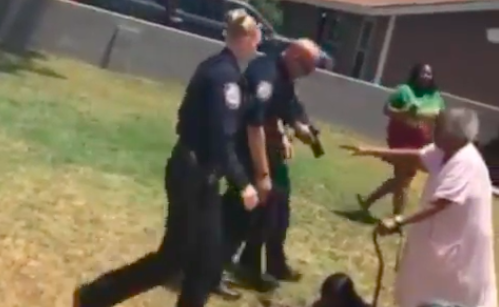 Dramatic bystander video shows a 90-year-woman appearing to break up a tense standoff between Midland police who drew weapons on her grandson following a traffic violation.

The Midland Police Department is facing criticism for how it handled the arrest of Tye Anders, the 21-year-old black man in the video. Anders is accused of rolling through a stop sign in the West Texas city and continuing to drive to his grandmother's home instead of pulling over immediately for police.

Video of the May 16 arrest shows officers training pistols at Anders while he lies face down on the front lawn. Anders, later charged with a felony charge of evading arrest, can be heard shouting that he's scared and begging officers to lower their weapons.

"Why would he talk to you when you've got a gun out?" one bystander asks. "I would be just as fucking scared."

In the clip, Anders' grandmother, leaning on a cane and wearing a pink housecoat, can be seen approaching the young man and telling the officers to leave him alone. As police approach, she appears to fall or be pushed over. Family members rush to aid her.

I just spoke with Tye Anders’ mother. He’s the young man who had pistols drawn on him in this video. His alleged offense was rolling through a stop sign. Recently, he’d been getting pulled over and harassed by the Midland, TX police a lot. A dozen officers swarmed his grandmothers, guns drawn, as if this was a response to a violent offense. It wasnt. As Tye laid on the ground compliant, yet scared, his 90 year old grandmother came out to deescalate this high stress situation by praying for her grandson and officers. That also didn’t work. As the officers approached, they ended up assaulting her and knocking a 90 year old woman to the ground. According to the family, this elder passed out moments after being pushed to the ground. They have taken her to get medical attention to make sure she didn’t experience a stroke, or any other serious complication. This was all for an alleged traffic stop. We need Midland Police to address this issue immediately. Come back for action items

Initially, the city of Midland refused to release police body and dashboard camera footage of the incident, according to a report from Marfa Public Radio. However, the department eventually released two hours of video from the incident on May 22.

Backlash over the confrontation prompted city officials to schedule a Thursday, May 28 community discussion, the radio station also reports.

“I cannot comment on the strength or weakness of the case, nor any potential outcomes,” she wrote. “However, there were no actions taken by any member of the Midland Police Department that would cause me any concern with moving forward with the case.”

The family says Anders was assaulted while handcuffed in the back of the police car and that the charges should be dropped.