by Kiko Martinez and Michael Marks 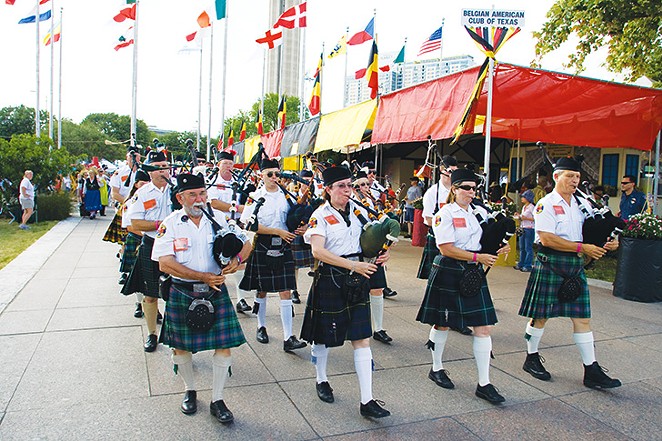 Leading the band of bagpipes and drums into their 45th year at the festival is David Sutherland, who has been a member of the group ever since he was a kid. Although Sutherland admits he’s had to skip a couple of festivals over the last four decades (while stationed in Iraq), he’s proud to say his father, who is in his late 80s, hasn’t missed one.

“Every year, the Folklife Festival turns into a family reunion of sorts,” Sutherland said. “My favorite part is sharing in the cultures.” So, what would Sutherland like Texans to learn about Scottish heritage when they attend the festival? “If you’re from Texas, I can almost guarantee that you are Scottish,” he said. “I invite people to go to the Alamo and look at all those Scottish names and know they have some of that blood running through them.”

Sikh Dharamsal represents the roughly 300 families in San Antonio who are members of the Sikh faith — a 500-year-old religion that originated in northern India.

Sikh men are recognizable by the turbans they wear. The religion is sometimes mistaken as a sect of Islam, according to Gurpaul Singh, the media relations director for Sikh Dharamsal. Having a presence at events like the Folklife Festival, which Sikh Dharamsal has participated in for three years, is important to build a better understanding of the faith within the broader community.

“So often in the post-9/11 era, a turban is associated with a CNN sound bite of something negative — something to almost be afraid of. We are God-fearing people. People who have very similar core values in terms of freedom, equality and we want to share those with the local community,” Singh said.

At the Folklife Festival, Sikh Dharamsal will perform a traditional Punjabi dance called a bhangra. The group will also host a booth where visitors can have their names written in Gurumkhi, the Sikh alphabet, and have a traditional turban tied on their head. The turbans, Singh said, tend to be especially popular. But the performances and attractions point to a larger purpose for the group.

“It’s important that we create awareness of who we are and what we stand for. Where there’s education, awareness and understanding, that’s the antidote to xenophobia and racism,” Singh said.

Don’t expect to see anything you could find in the aisles of Home Depot or Lowe’s at Rick Smith’s festival exhibit. His collection of old ranch tools dates back 150 years and five generations to the 1860s.

“If you were a machinist or blacksmith or shoe cobbler back then, these are the tools that you would use,” Smith said. “I’ve probably got about 25 hammers that all do a different job.” Along with his hoard of hammers, Smith is traveling from his home in Devine with a 16-foot trailer filled with about 7,000 pounds of instruments — crosscut and rock saws, hand-crank drills and lumberjack tools, to name a few.

Word to the wise: None of Smith’s tools are for sale. You can ask, but do you know anyone who would part ways with a 100-year-old bunghole cutter?

Located in Giddings, Texas, the nonprofit Texas Wendish Heritage Society formed in 1972 to share the story of how the first Wends (a historical name for Slavic pioneers living near Germanic areas), came to call Texas home in the 1850s. At the festival, members will serve up some Wendish delicacies, including “koch kase” (cooked cheese) sandwiches, noodles, gingersnap cookies and pickled watermelon rinds.

“You ask a guy on the street and most have never heard about the Wends,” said TWHS member Ron Knippa. “The festival is a good place to come learn about their immigration. We also like for people to taste some of our noodles."