With nearly all votes counted shortly after 9 p.m., Nirenberg declared victory with 51.1% of the vote. Brockhouse pulled in 48.9%.

"We had clear differences in this race," Nirenberg told supporters gathered at the Friendly Spot, a Southtown craft-beer bar. "Differences in the path we want to take as a community. I offered a vision for equity, for justice, for action, for making sure your mayor's office represents everyone."

The results capped an often-bitter campaign that highlighted differences between suburban and urban voters in May's citywide election. Those inside the Loop largely supported Nirenberg, while suburban voters tended to favor Brockhouse.

The contest also revealed that the deep partisan divides in national politics have trickled into a local race long considered a nonpartisan affair. In addition to seizing on a general distrust of government, Brockhouse whipped up controversy over council's recent vote to exclude Chick-fil-A from an airport concessions contract by claiming the move was a fueled by anti-Christian bias.
Tensions also ran high as Brockhouse was forced to contend with domestic violence allegations contained in a pair of police reports dating back to 2009 and 2006.

"In the end, the clock ran out on the Chick-fil-A issue for Greg Brockhouse and started to run on the domestic violence issue," Democratic political consultant Laura Barberena said. "There was a shift in the narrative." 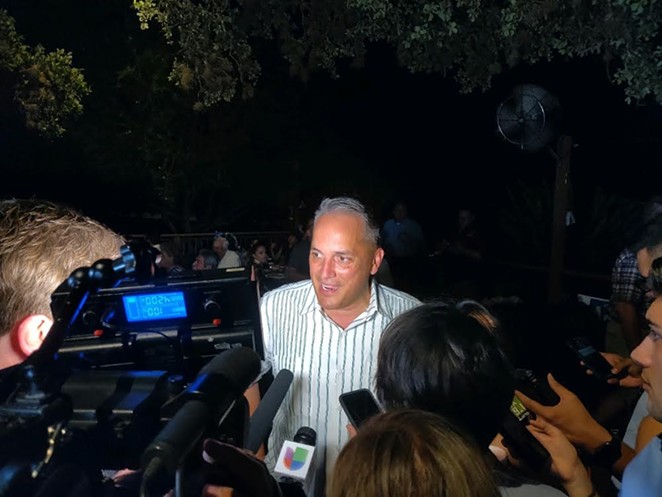 Down to the Wire

The mood at Nirenberg's watch party was largely optimistic, even as additional precinct counts chipped away at a 51.6% lead reported by the Bexar County Elections Department earlier in the night.

Nirenberg appeared to hold back tears during an early address to the crowd as he thanked supporters from the LGBTQ community, labor unions and organizing groups. Afterward, his wife Erika Prosper Nirenberg delivered her own thank you messages in English and Spanish, breaking into tears during the latter.

At Brockhouse's party at Viola's Ventanas — a Mexican restaurant in the far western suburb of Westover Hills — a calm, cheerful energy pervaded. He put a positive spin on the outcome of the narrow race.

"This is just an affirmation for me that our message, our team, my family was just as admired in the community as Ron was," the one-term District 6 councilman said of his underdog campaign.

Even so, Brockhouse lashed out at media coverage of the election, calling the Express-News the "communications arm of the Ron Nirenberg campaign."

"It's by far the most media-biased election that I've ever seen," he added.

Nirenberg's 2017 victory over then mayor Ivy Taylor came in part because progressives latched onto him as they sought a local political win to follow up the crushing blow of Trump's presidential victory.

But, over time, there were indications some of that progressive support eroded, especially after Nirenberg only reluctantly supported San Antonio's paid sick time ordinance and didn't lobby to shield it from attacks in the Republican-dominated Texas Legislature.

Even so, following the general election, the mayor gained the endorsements of the Texas Organizing Project, Texas Democratic Party and San Antonio Democratic wonder-twins Julián and Joaquin Castro.

Still, the campaign's polarized rhetoric could make it difficult for the mayor to gather public support for efforts such as his planned revamp of San Antonio's transportation system, which will require voter support in a public referendum.

"I hope that the mayor will take this election to heart and start to lead in a different way," Barberena said. "I think he could do a better job of building meaningful coalitions."

In the East Side's District 2, political newcomer Jada Andrews-Sullivan narrowly defeated Keith Toney. She took 52.1% of the vote to Toney's 47.9%.

In District 6, attorney Melissa Cabello Havrda bested Andy Greene in the run for the council seat being vacated by Brockhouse. She won 53% of the vote, compared to her opponent's 47%.

Rocha Garcia said the majority of attendees at her victory party were female, adding that she is proud of the "women-empowering-other women" vibe of her campaign.

"For the first time in this city's history, we will have a female majority on council, and it's about darn time," Nirenberg said at his watch party to a cheer from the crowd.