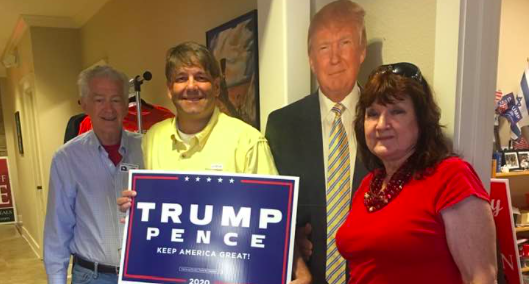 In the meme, a photo of Soros, who happens to be Jewish, is accompanied by text reading, “I pay white cops to murder black people. And then I pay black people to riot. Because race wars keep the sheep in line.”

The Comal County Republican Party, which represents GOP voters in New Braunfels and surrounding areas, did not respond to the Current's request for comment.

Soros has long been a favorite target of online conspiracy theorists. Anti-hate group ADL recently posted an article unraveling the anti-Semitic implications of the posts, which have been circulated in part by members of racist groups.

"Although the vast majority of Soros-related conspiracy theories do not mention his Jewish heritage, the concern remains that they can serve as a gateway to the antisemitic subculture that blames Jews for the riots," the ADL writes. 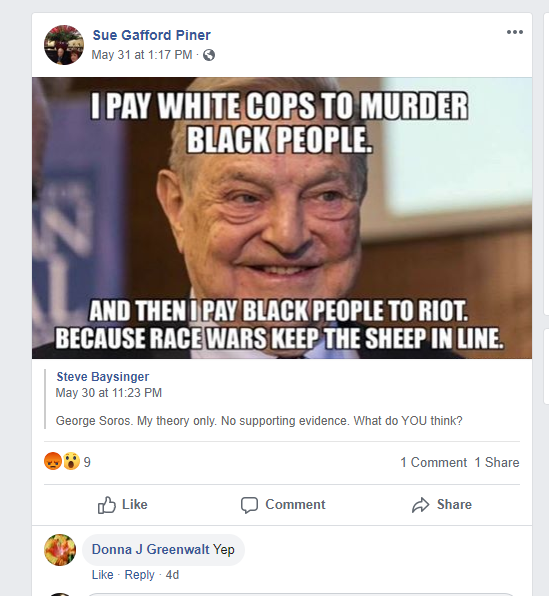 The email from the Texas Democrats included a link meant to direct back to the meme on Piner's page. However, at press time, the content appears to have been removed.

Brehm ignited a firestorm of controversy this week when she made a post Facebook suggesting the death of George Floyd while in Minneapolis police custody was staged to hurt President Trump's reelection chances.

The Texas Democrats' email also includes a capture of a now-removed meme purportedly shared by Harris County GOP Chair-Elect Keith Nielsen featuring a quote from civil rights leader Martin Luther King Jr. next to a banana. The juxtaposition plays off "disgusting, long-standing racist tropes about black people," the Dems wrote in the email.

“At the end of the day, this despicable behavior falls on the shoulders of the Texas Republican party’s leaders: Gov. Greg Abbott and Lt. Gov. Dan Patrick," Democratic spokesman Rahman said. "They are the ones who have created the modern Texas Republican party which has allowed this hate and vitriol to thrive."