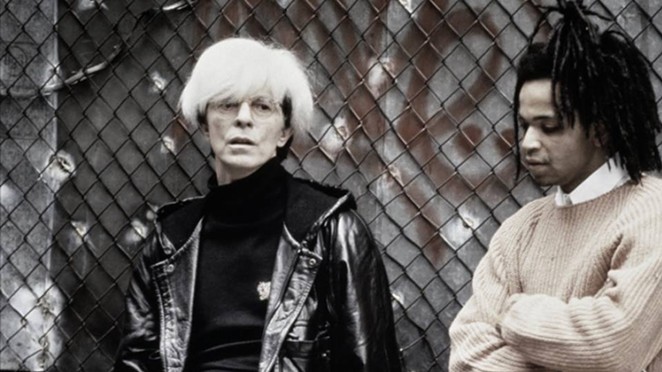 Besides being national Women’s History Month, March is locally known as San Antonio’s Contemporary Art Month as well. Below, I’ve highlighted four films that have become essential viewing for those interested in boundary-pushing artistic endeavors in an effort to get you in the mood to enjoy all of the various activities the city has to offer during this most special of months. So pop some corn, drink whatever beverage you have come to favor and pat yourself on the back for further enhancing your working knowledge of art world references and film history.

Crumb (1994) – Presented by David Lynch and directed by Terry Zwigoff (Ghost World, Bad Santa and Art School Confidential), this documentary examines the eccentricities of pop culture cartoonist Robert Crumb and the peculiarities of the family members with which he was raised. Crumb’s artwork first came to the public’s attention in 1968 with his involvement with Zap Comix, the first successful underground comic publication. It was during this era that Crumb created perhaps his most famous creation, Fritz the Cat, which was later made into an X-rated animated feature film in 1972; the artist completely disowned the feature and later killed the titular character in his comic strip out of artistic frustration.

Underneath the farcicality of Crumb’s visual stylings lies an inherent fascination with both the male and female body and the absurdity of human sexual desire, a fixation created by the artist’s implicit shyness and introverted demeanor. Watch this film with an open mind and gain greater insight into the mind of one of the greatest American artists you may not have heard of.


Basquiat (1996) — A biopic about the life and times of world famous New York artist Jean-Michel Basquiat that follows his rise to fame from a down and out starving bohemian to a bonafide sensation in the cliquish Manhattan art community. Jeffrey Wright’s meek portrayal of a man who could take or leave the limelight designated for inspirational genius underscores the abnormality of this artist’s happenstantial discovery. Basquiat’s paintings were so rudimentary that it suggests to the viewers that even their children could create a composition of similar aesthetics. However, this element of Basquiat’s artwork only serves to celebrate the messy and imperfect DIY sensibilities of the punk rock bands that were taking the American world by storm from ’77 and into the early eighties. On Netflix Instant.

American Mary (2012) – The diabolical Soska Sisters (who have recently been tapped to remake David Cronenberg’s Rabid) bring us this epic tale of a debt-ridden med school dropout and sexual assault survivor who comes to prominence in the underground – and illegal – subculture of body modification, an area of controversial contemporary art that is highlighted in the documentary Modify. The titular Mary unleashes her vengeance on her unwilling male perpetrators through tongue-splitting, implants, teeth filing, genital modification, and voluntary amputation. While Van Gogh cut off an ear, the up-and-coming Mary surgically removes so much more in this horrific embodiment of the capitalist American dream drawn out in Scarface fashion. On Netflix Instant.

Picasso Baby (2013) – A collaboration between Jay-Z and director Mark Romanek, Picasso Baby could be described by the layman as a music video (and not performance art). However, the rapper’s recital takes place in a Brooklyn art gallery, allowing his rabid fans to have a one-on-one interaction while seated on a bench as Mr. Z serenades them with freestyle verse all to the background beats of the Baby Picasso track. As an exercise of artistic freedom, this is the most intimate exhibition that Jay-Z has undergone since coming up in NYC clubs before he got a record deal, the type of personal presentation that cannot be experienced in a concert at Madison Square Garden or other venues of the like.

To learn more about what Contemporary Art Month (CAM) activities are occurring throughout the city of San Antonio this month, click this link: CAM 2016.