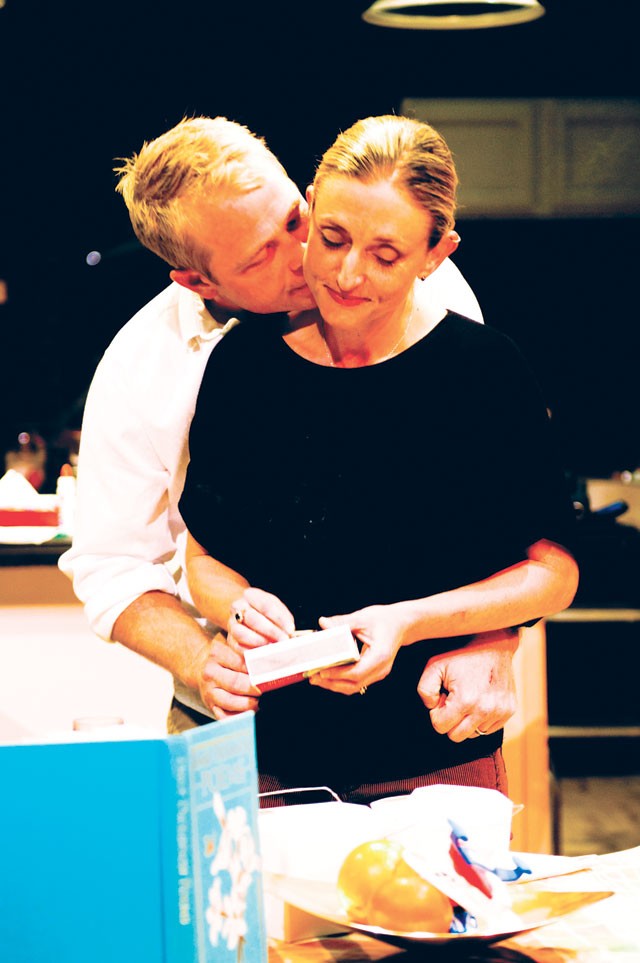 Why do couples stay married? Love? Devotion? Obligation to children? Or are they held together by habit reinforced by the fear of being alone? AtticRep's production of Michael Weller's Fifty Words travels through a long night of questions, confused passions, and painfully physical action to reach a desolate morning. The only questions remaining then are "Why at all?" and "How?"

Janine, played by Renee Garvens, is a dancer who has sacrificed her career to have a child and now finds herself consumed by a dead-end internet job. Tim Waggoner plays her architect husband Adam. Their marriage has been "going through a bad patch" when the couple find themselves alone together for the first time in nine years during their son's first sleepover. The first act begins with brittle, forced dialogue as Adam attempts to seduce his wife. Waggoner plays the role with goofy egoism, simultaneously desiring, yet talking-over, Janine, who Garvens portrays as icy and tight, but at times bemused with her husband's strange protestations of love. But when betrayals are revealed, the mood becomes oppressively hot as the two mix repressed lust with physical violence. Glass and tempers break as the two demonstrate over and over that love is perilously close to hate, and that with familiarity comes the knowledge to wound.

Weller, who has written almost 20 plays, including the musical Zhivago, has entered territory we know well. Though the conflict in Fifty Words follows the battling-spouse tradition of Edward Albee's Who's Afraid of Virginia Woolf, we don't quite believe this story. The fighting moves too swiftly back to neutral; violent protestations of hate switch to pleas of love. Rancor and regret surge and break, but the characters are trapped acting out their terrifying new roles with the cyclic tedium of old domestic routines. These reversals, however, offer the actors ample room to strut technique as they run the scales of emotion. Garvens (a mote compared to the towering Waggoner) excels in maintaining presence far outstripping her size, while Waggoner's surfer looks and spitting anger project a man who can snap but is too weak to maintain confrontation. The production, designed by local artist Jeremy Teutsch, places the set on the floor of the Attic Theatre with the audience on three sides of the action. With lights never blocking out the faces of other theatre goers, the audience has no place to hide. Director Andrew Thornton uses this to build tension, placing us literally within the confrontation. It's not necessary to believe what is being shown, its intensity is sufficient. If at the end we don't know what was real, well — neither do the characters. •