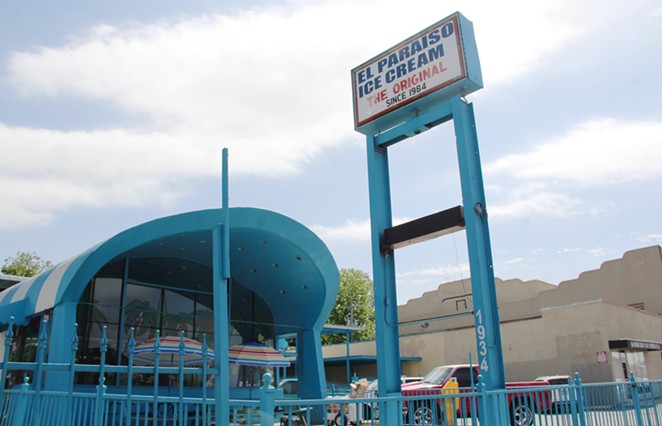 It’s hard to imagine enduring a sweltering a summer without paletas, or Mexican popsicles. But they haven’t always been a San Antonio mainstay.

Before José Flores and his wife, Maria, opened the doors of El Paraiso — the Alamo City’s best-known paleta maker — in 1984, there were few local paleterias, or dedicated paleta shops. Not to mention, raspas were the frozen treat of choice.

El Paraiso, which is still run by the Flores family, now sells between 10,000 to 12,000 paletas a day to a mix of walk-in customers and retailers that carry its product. Customers of all ages open the freezer doors of its Fredericksburg Road factory and store whenever they crave the sweet taste of a strawberry flavored paleta or the saltiness of mango con chile.

While the company’s success may be homegrown, the Flores family were actually San Antonio transplants.

They discovered the city while taking trips from their hometown of Chicago to Mexico. Tiring of his demanding factory job, Jose Flores decided the family needed a change. Inspired by his memories of the paleteros in Chicago’s Little Village, he decided to start his own business and bring that experience to the Alamo City.

“They wanted to move to a city that had a denser Hispanic community so that their children would grow up in their culture,” said Maggie Flores, who helps her parents manage the business. “They thought that San Antonio was perfect to start a business and raise children.”

Not to mention, Jose Flores pointed out, San Antonio’s warm weather makes it a perfect market for the icy treat.

Using fresh, quality ingredients and original recipes, the couple started El Paraiso with just 12 flavors. Business built through word of mouth, and the company gained another boost when it was featured on a Spanish-language television program a few years after opening its doors.

The menu has since expanded to 24 paleta options, including vanilla and raisin, piña colada, cookies and cream, watermelon, pineapple and lemon. But the Flores family’s dedication to quality remains. They use name-brand and fresh ingredients —from Borden’s milk and Oreo cookies to fresh strawberries to cocoa beans.

The 10-person paleta crew works to create one flavor at a time, using a process that requires each flavor’s ingredients to be poured into dozens of steel molds. The plaletas are placed in a large bath that freezes them within 10 minutes. Once done, they’re sealed in the signature white and blue packaging and stored in a walk-in freezer.

Because of the manual labor required, El Paraiso has only grown internally, keeping all of its production at a single location.

“It’s the artisan way we do things. We don’t do anything automated. This dessert is such an important part of our culture,” Maggie Flores said. “I actually remember the paletero passing by my own house ringing the bell. I remember going, ‘Oh, I know him!’”

At one point in the 1990s, El Paraiso employed nearly 50 paleteros, who traveled the neighborhoods selling from push carts. That number dwindled as harsh weather, permit requirements and urbanization made the trade more difficult. Even so, about 15 paleteros still make the rounds during the warmer months, clanging their bells as they stroll the streets.

And, of course, plenty of customers still visit the store, often picking up paletas by the dozen.

Longtime customer Myra Cazares visits every time she’s in San Antonio, and her family picks up a box of paletas to take back home. For Cazares, walking into El Paraiso takes her back to summertimes when her family once lived a few blocks from the store.

“We grew up with these paletas in our neighborhood,” she said. “They were part of many memories with our families, so I guess that’s why at least I hold a special place for them in my heart.”