Cool Treats: Where to Cool Off in San Antonio This Summer

Paletas, ice cream, snow cones, gelato, shaved ice, milk shakes and more — San Antonio has never been short on ways to make it through the sticky summer days and nights. Here’s how you can eat your way through SA to survive this summer.

Hong Kong waffles officially made it in our fair city in 2016. And they’re not showing signs of stopping. At Kuma, the dessert clocks in around $8 a pop. So, the dessert isn’t entirely cheap, but it’s huge and shareable. The menu is constantly evolving with new flavors of ice cream, drizzles and toppings such as torched marshmallows and unicorn ice cream. It’s also growing to include bubble teas and savory items like bomb chicken – fried chicken with a Chinese twist. Get there early – the tiny shop has had steady lines of hungry followers since day one.

Gabriel Martinez, along with wife Elisa and brother Luis, brought a bit of Ciudad Juarez to the Alamo City inside Honchos, their bright yellow House of Churros to the corner of Babcock and Huebner roads, and have recently added a second trailer in Schertz for the San Anto area’s churro needs. The fresh-made churros, filled with your choice of strawberry sauce, cajeta, Nutella, condensed milk or Honcho sauce (think spiced up caramel sauce), are $3 a pop. The recipe for the tasty treats was passed down by the brothers’ grandfather who made churros for his grandchildren for holidays and birthday parties. But with the sweat-filled months we’re about to incur, the winning combination is the truck’s frozen churro made with a hefty scoop of ice cream and a halved churro for $5. 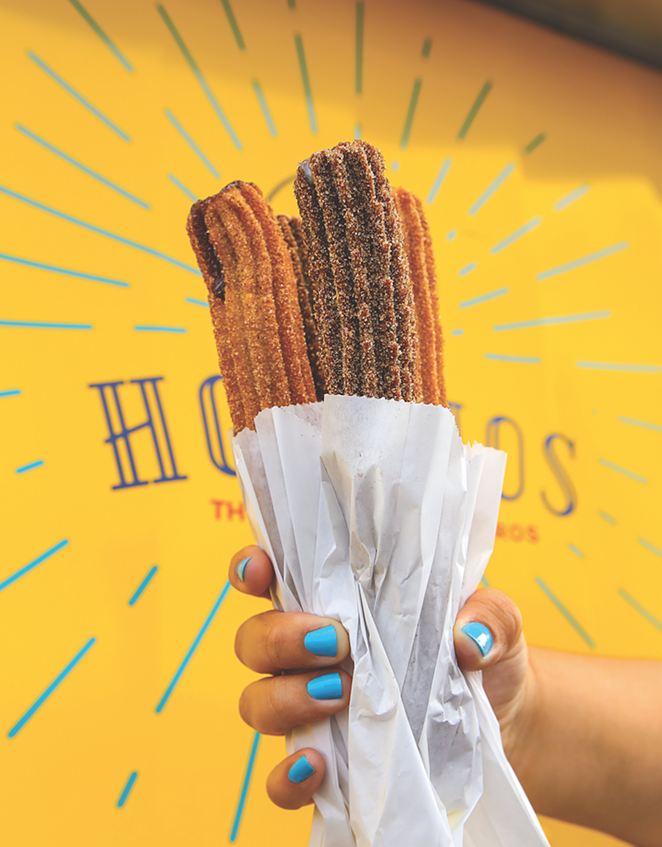 Though boba, or bubble tea, is far from new (The New York Times hailed it as too mainstream in 2016), San Antonians were begging for more of the chewy tapioca ball-filled drinks. Kung Fu Tea, a New York City-based franchise, opened a stylish new outpost near La Cantera. Catering to students and families alike, the shop carries a wide collection of classic teas, milk teas, slushes and punch teas, and a handful of seasonal specials. Down the road on De Zavala, Snowflake Paradice brought in rainbow tea with colorful jellies and the addition of a second shaved ice shop (Snopioca opened early in 2016 off Babcock). Brew’s Lee Tea, opened by Frances Lee, is an über cute locale perfect for hanging with friends or zoning out with their teensy Zen gardens. The tea menu features your choice of dairy or non-dairy milks, coffee jellies or tapioca pearls, and they even allow you to tinker with the sugar content with varying degrees of sweetness. Try a split cup for more flavors or be amazed by the glowing Kalamasi tea that changes colors once combined.

Perhaps one of the most exciting moments in San Antonio foodie desserts was the addition of the ever-popular Thai-style rolled ice cream. Made on extremely cold metal plates, and rolled using a spatula, the ice cream hadn’t reached SA until 2017. FruitMix on Bandera was the first to introduce it with San Anto-inspired flavors and mixings including conchas, pecan pie, Christmas cookies and more. El Paso-based Fahrenheit 32 at Embassy opened its third location in Texas. Flavors include everything “Purple Haze” with taro ice cream or “Black Magic” with black sesame ice cream with unlimited toppings. Finally, Tasty Nation on DeZavala opened with flavors that harkened to the Mexican childhood flavors of owners Jose Perez and Adrian Cadena. Expect Maria cookies, La Lechera, Gansitos and more.

There’s no shortage of ice cream around these parts. A trip to the North Side means you can score a chocolate gyro from Baklovah Bakery on Wurzbach complete with ice cream and chocolate shavings, or you can keep things chill at Brindle’s Awesome Ice Cream on Huebner with an ice cream waffle taco. Or stop by Freshest Ice Creams on Callaghan, which carries vegan and lactose-free ice cream with a Brazilian twist in flavors such as chia coconut, avocado and coffee. In Southtown, The House Boozy Ice Cream and Brews adds booze into your creamy faves, or you can keep things simple at South Alamode Panini & Gelato Co., which brings Italian flavors to South Texas with gelato.