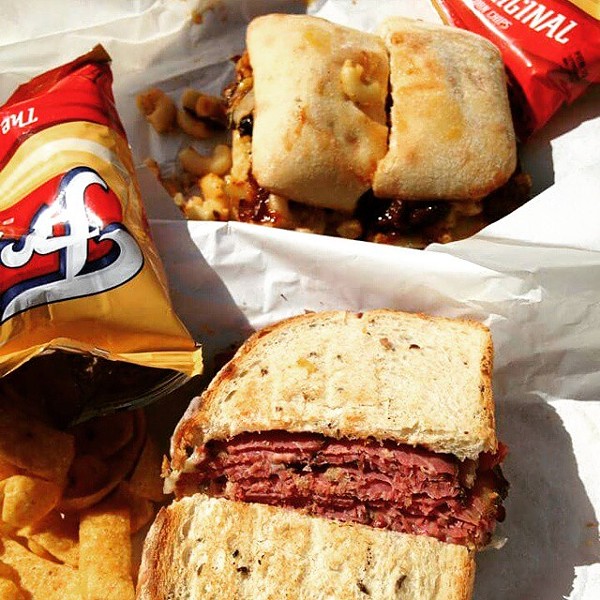 There's been another meat-related burglary in town. While I can't in good conscious relate this one to The Brisket Bandit, I can share the news that Dignowity Meats (1701 E. Houston St., 462-1496) was burglarized this past weekend.

The shop, which opened this past January, lost $1,000 worth of meat products (including corned beef for their pastrami sandwiches, just in time for St. Patrick's Day), along with the slicer (which was used for just about every sandwich), tools used for the remodel of the building and the sole iPad register. A fan was able to secure a temporary slicer for the restaurant from a local church, so the eatery hasn't missed a beat.

Andrew Samia and Shane Reed, the guys behind Crazy Carl's, opened Dignowity with business partner Denise Aguirre (Taps Y Tapas, The Point Parks). The restaurant will beef up security and are covered by insurance, but the incident has definitely left its mark on the new business owners.

A number of T-shirts are being printed with a missing slicer flier to help raise awareness of the recent string of break-ins the area as a whole has faced.

We've reached out to SAPD about whether the incidents could be related to the recent brisket burglaries at area barbecue joints.  "We wouldn't link it to any other cases without direct information or evidence," San Antonio Police Department spokesman Javier Salazar said via email.

SAPD declined to release a copy of the incident report to the San Antonio Current.