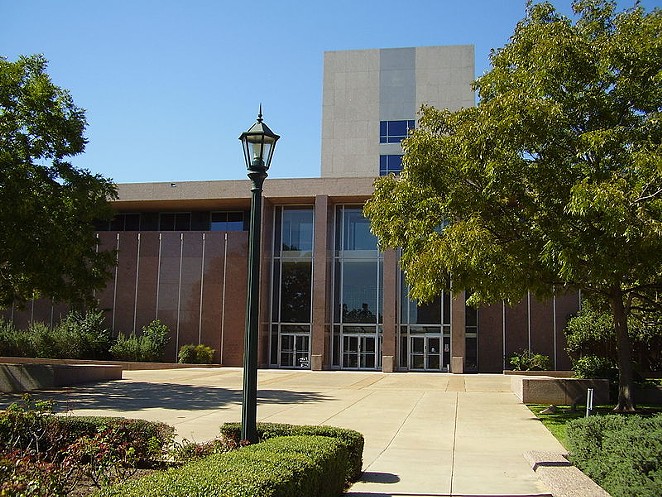 Typically not top of mind for voters, the nine Republican justices of the Texas Supreme Court have come under the spotlight during the coronavirus pandemic with a slate of high-profile and controversy-generating moves.

Actions on bail, evictions, debt collections, vote-by-mail and a Dallas salon owner named Shelley Luther have foregrounded the court in a year when four incumbent justices face reelection — making it easier, Democratic challengers say, to make the case against them.

Last week, the high court lifted its coronavirus ban on evictions and debt collections, put in place in March as the economy shut down and hundreds of thousands were added to the unemployment rolls. And the justices temporarily put on hold a lower court ruling that expanded vote-by-mail access during the pandemic. Both decisions have infuriated some voters and energized the Democratic Party.

This month, the court ordered the release of Luther, who was jailed for contempt of court after refusing to shutter her salon under coronavirus orders; earlier this spring, it sided with state officials in limiting how many inmates could be released from county jails, which have become hotspots for disease.

Democrats, who have not won a seat on the state’s highest civil court in more than two decades, have reclassified the typically sleepy races as a “top-tier priority,” a designation party officials said comes with digital ad spending. And some candidates have already begun to speak out publicly against high court decisions they say disenfranchise voters and risk their safety.

“I think people’s eyes are opening up,” said 3rd Court of Appeals Justice Gisela Triana, one of the four women running for Supreme Court on the Democratic ticket this year. “What has been the sleepy branch of government … has woken up.”

The vote-by-mail decision that has drawn particular rancor, is, for now, only temporary — though that hasn’t stopped Democrats from making it a key talking point. Democratic judges on two lower courts had ruled that susceptibility to the coronavirus could be considered a “disability” under state election code, allowing most Texas voters to take advantage of mail-in ballots that are typically available to very few. The Republican high court put that expansion on hold and is set to hear oral arguments on the issue on Wednesday. On Tuesday, a federal court ruledon the same issue — a legal morass that some predict may ultimately be resolved at the U.S. Supreme Court.

“We will make sure every Texan knows who was responsible for putting their health at risk in order to vote,” said Texas Democratic Party Executive Director Manny Garcia, in a press release that called the high court a “death panel.” “Republicans Nathan Hecht, Jane Bland, Jeffrey Boyd, and Brett Busby have constantly put blatant partisan and special interests over the needs of everyday Texans. They are endangering the lives of Texans and making our recovery from COVID-19 more difficult.”

The court has not yet weighed the merits of the vote-by-mail case, and did not offer an explanation for its one-line order last week. Texas Attorney General Ken Paxton has argued that the Legislature imposed strict limitations on who can vote by mail, and that expanding those limits even during a pandemic would be contrary to state law.

Triana, Staci Williams, Kathy Cheng and Amy Clark Meachum are vying for spots on the court, with Meachum seeking the position of chief justice. Meachum, Williams and Triana all currently serve as judges, and Cheng is a Houston attorney in private practice.

In down-ballot, low-information judicial races, voters often make their decisions using only information they can glean from the ballot itself, like party affiliationand gender. Party officials said the candidates are pitching themselves as one consolidated slate, coordinating message and strategy. Judicial candidates typically rise or fall together, winning very similar percentages of the vote.

Democrats hope that if voters know more about the incumbents’ records, they’ll vote them out. Williams has been outspoken in her criticism about the high court’s decisions.

“While millions of Texans struggle during a pandemic which by all indications is getting worse, not better, in Texas, the Supreme Court has decided that they will return to business as usual when it comes to evictions and debt collections,” she said Monday.

She took particular aim at a tweet by Busby, one of the Republican justices on the ballot this fall, who posted last week about a Texas Supreme Court order that he suggested would help Texans struggling to pay rent.

Many can't pay rent due to the pandemic, and I and my #SCOTX colleagues are responding with a new order. It ensures evictions from housing covered by the CARES Act are delayed until 7/25. Texans must have safe places to stay to defeat this virus; this order will help us do that! pic.twitter.com/13VWxLOT6d

In fact, the CARES Act eviction protections he referred to are granted by federal law, not by the state court. The Texas Supreme Court order he referred to was the one that lifted a statewide moratorium on evictions.

Busby said the court had used its power to modify court procedures during an emergency to postpone eviction hearings, but “only the legislative branch can change its eviction laws to stop evictions indefinitely.”

Triana, Busby’s opponent this fall, dismissed that explanation, emphasizing that the court’s decisions on evictions were not legal rulings stemming from cases, but policy decisions made through the court’s ability to regulate judicial proceedings. The eviction decision was “just cruel,” she said.

Democrats also criticized the court’s decision to hear the vote-by-mail case and to temporarily pause the expanded access lower courts had granted. Acknowledging that it is “not typical” for a sitting judge to make such a statement, Williams said, “as a candidate and advocate for basic constitutional rights for all Texans, I believe the court should carefully reconsider its decision to hear this case.”

Criticizing court decisions is treacherous territory. Codes of judicial ethics restrict judges and judicial candidates — who are supposed to appear impartial — from commenting on cases that might land in their courtrooms “in a manner which suggests to a reasonable person the judge's probable decision on any particular case.”

Judicial candidates say much of their campaign time is spent explaining to voters that they judges are indeed elected in Texas, and telling them what each court’s duties entail. Democratic candidates typically run on promises to restore balance to a court that has been dominated by Republicans for 25 years.

This year, the pandemic may dominate the message as it transforms the campaign.

“It’s going to be a much harder time to say, ‘Hey, everything’s okay, and I’m just going to vote for whoever I’ve been used to voting for,’” Triana said. “In the air, there’s a real hunger for change.”