In 2017, dozens of Fortune 500 companies, chambers of commerce and tourism groups spoke up against legislation championed by Texas Republican leaders that would have banned transgender people from public restrooms. It ultimately failed.

So, where have those same corporations been as Texas lawmakers passed one of the most restrictive abortion bans in the country?

The law, now being challenged by the Justice Department, leaves women with only a two-week window in which to realize they’re pregnant and seek an abortion. What’s more, it offers no exceptions in cases of rape and incest, and it allows people to seek a bounty by suing virtually anyone they claim assisted a woman in seeking an abortion.

To date, the highest-profile pushback has come from software giant Salesforce, which said it will help relocate staff out of Texas if they want to leave. Noting that the new law creates “incredibly personal issues,” Salesforce said it would offer financial help to workers who relocate.

California-based public relations firm Bospar also announced it will offer $10,000 to its six Texas employees to fund their relocations over of the abortion ban.

Benefit Cosmetics, Yelp and dating app operators Match Group and Bumble have also voiced their opposition, while ride-sharing companies Lyft and Uber said they’ll pay legal fees for any of their drivers accused of transporting an abortion patient.

“This law is incompatible with people’s basic rights to privacy, our community guidelines, the spirit of rideshare, and our values as a company,” Lyft wrote in a message to drivers, adding that it’s donating $1 million to Planned Parenthood. 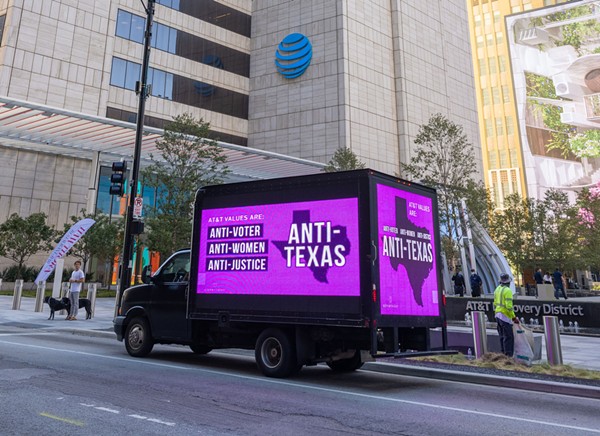 Still, let’s face it: none of those things are likely to make ripples in the $1.9 trillion Texas economy. Not to mention, dozens of corporations including Dallas-based AT&T, Warren Buffett’s Berkshire Hathaway and energy giant Chevron together funneled millions into the election campaigns of Texas lawmakers who sponsored the abortion ban.

Economist M. Ray Perryman, who authored a study on the potential economic fallout from Texas’ passage of new voter restrictions, found that controversial law is likely to whack $31.4 billion from the state economy and destroy 223,000 jobs as tourism dollars and business investment dwindle.

While Perryman hasn’t run the numbers on the state’s new abortion law, he said the measure fits the same pattern.

Further, knowledge- and technology-oriented businesses don’t want to locate in or continue putting money into states that impose social restrictions that make it harder for them to recruit workers.

“Laws that are less inclusive, whether they make voting more difficult, limit opportunities based on gender identity, restrict access to health care for indigent persons, unreasonably limit flexibility in family planning or misrepresent history in a racially biased manner, pose substantial risk to the Texas economy over an extended period,” Perryman said via email.

In other words, while corporations love the hands-off business environment created by Texas’ Republican leaders, they also must answer to employees, shareholders and consumers.

Robert Scherer, dean of Trinity University’s business school, said he doesn’t expect to see companies move out of Texas over the abortion ban. But taken together with other controversial bills the Lege passed this session — including the voting restrictions and prohibitions on public school teachers discussing race in the classroom — will make it harder for the state to recruit new businesses.

“If a company wants to distribute their products in Texas, this isn’t going to stop them from building a distribution center,” said Scherer, a scholar of human resources and organizational behavior. “However, a company operating in the knowledge economy can locate anywhere. I think those kinds of businesses will think twice about relocating to Texas. The decision-making on that is probably going on right now at those companies.”

Following the law’s passage, Abbott told CNBC “a lot” of Texas businesses and residents support the abortion ban he championed. Without data to back it up, he offered a rosy prognosis for the state’s ability to recruit corporate investment.

Abbott also said he speaks regularly to Tesla CEO Elon Musk, who “consistently” says he “likes the social policies in the state of Texas.”

Musk quickly responded to a clip of Abbott’s pronouncement on Twitter. While making no specific mention of abortion, the billionaire said “government should rarely impose its will upon the people and when doing so, should aspire to maximize their cumulative happiness. That said, I would prefer to stay out of politics.”

When it comes to abortion, Corporate America seems to have a similar policy about staying out of politics — at least publicly. Experts point out that abortion is a trickier issue for corporations to take a stand on because it can intersect with employees’ religious beliefs.

“It’s not surprising, because this is harder than a number of other issues,” said Sandra Sucher, a professor of management at Harvard Business School, told political news site The Hill. “Abortion is particularly contentious because we know that it relates to people’s religious views, which is kind of a no-go zone for companies.”

‘We’ll see this play out’

The abortion ban isn’t the only bill Texas lawmakers passed this session that’s shaking corporate leaders’ confidence in the direction of the state, however.

During the legislative session, some 60 businesses and groups — ranging from Microsoft and Levi Strauss to the San Antonio LGBT Chamber of Commerce and Houston Area Urban League — signed on with Texas Fair Elections, a nonpartisan coalition calling for widened, rather than restricted, voting access in the state.

What’s more, 150 corporations, including Apple, Amazon and Target signed on to a letter urging Congress to pass the John Lewis Voting Rights Advancement Act, which strengthens protections for minority voters and would override the Texas restrictions. That measure passed the House with no Republican votes in support.

While corporations may not publicly voice their opposition to the abortion ban, it appears to be yet another warning to decisionmakers — whether they reside in the CEO’s suite or the human resources office — that Texas isn’t a hospitable environment for their workers.

Perryman warns that Texas’ Republican leadership can’t count on its past successes in recruiting business to override what the GOP-controlled legislature hath wrought.

“Texas has performed exceedingly well in recent years and is and has many competitive strengths, but this spate of legislation that restricts human rights and wellbeing cannot help but limit the state’s fortunes in the future,” he said.

Trinity’s Scherer agrees. The state’s lost economic opportunities over the Republicans’ scorched earth legislative session may not be immediately apparent, but they’ll likely manifest in time.

“I don’t think Texas not having a state income tax will be enough to trump the effects of the abortion ban,” he said. “Especially when you also consider voting rights and some of this other legislation. I think we’ll see this play out in three, six, nine months to a year.”