Cosmic Shore: The Delirious Space-surf Of Man Or Astro-man? 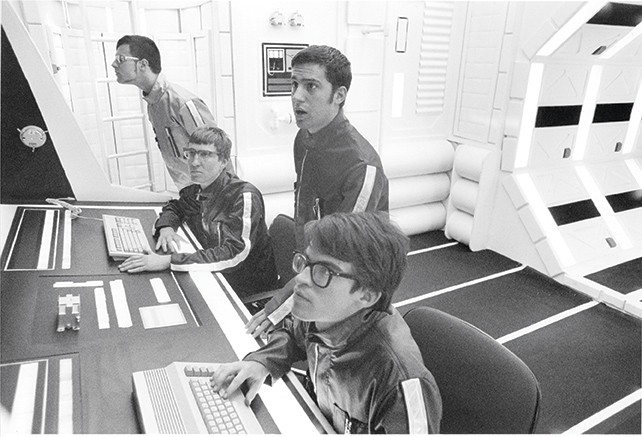 "The surface of the earth is the shore of the cosmic ocean. On this shore we've learned most of what we know. Recently we've waded a little way out, maybe ankle-deep, and the water seems inviting."

You might think Alabama is a strange place for a fucking wicked, outre surf-rock band to hail from. But, it's not so strange if you consider, as Carl Sagan groovily suggests, that all of the earth is a kind of cosmic shore.

Hailing from Auburn to be exact, Man or Astro-man? landed on the cosmic shore in the early '90s. The quartet ingeniously melds late '70s punk, classic instrumental surf à la Dick Dale and, perhaps especially, The Spotnicks in a futuristic grunge style all their own.

Between 1993 and 2001, over the course of seven LPs, the group took the surf-rock sound to galactic heights, updating it for a new generation and infusing it with a unique and trippy sci-fi mysticism. For its inclusion of all the disparate elements that make Man or Astro-man? great, the band's essential album is most certainly 2000's A Spectrum of Infinite Scale.

Following some of its finest work, the band took a 12-year hiatus of sorts, returning in 2013 with Defcon 5...4...3...2...1, a delectably delirious and generous album that is nearly impossible to pin down within the infinite spectrum of rock 'n' roll.

The lead single from the new release, "Disintegrate," is a gritty garage-rock jam that crashes and stops, seethes and squeals, and, devoid of almost any typical surf-rock vamping or note-bending, sounds like a grunge cover of a Velvet Underground song or a lost Sonic Youth gem.

The rest of Defcon largely follows suit, often burying limited alternate picking and other classic surf elements under deep layers of reverb and chunky grunge riffs, or eschewing them altogether.

Even though Man or Astro-man? has always been only partially a surf-rock outfit, Defcon is easily the group's least beachy, muddiest and most doomful effort.

In the live setting, Man or Astro-man? delivers notoriously zany and unpredictable performances that at once defy and exemplify the heady, interstellar freak out of its music. So bust out those space-groove moves and neon water shoes and get ready for high tide.