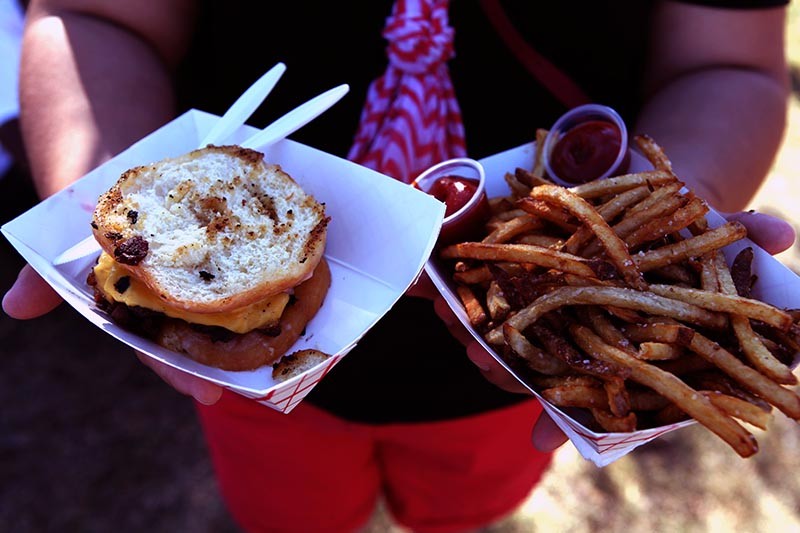 The guys behind Crazy Carl's are about to get hella busy. Not only will their "Eat St." segment air this month, but best friends Andrew Samia and Shane Reed are also working on their next project that will add East Coast-style deli sandwiches and Midwest smoked meats to Houston Street.

Before they open the doors at Dignowity Meats (1701 E Houston) in mid-November, let's take a look at how Crazy Carl's came to be and the parts that Samia and Reed are taking with them to the brick-and-mortar restaurant. The friends met in junior high after their respective families moved to Texas from Massachusetts and Missouri. They've worked at several restaurants together and each has a passion for cooking, which led them to literally building Crazy Carl's from the bottom up.

"We built the truck ourselves in Shane's brother's garage," Samia said. Meanwhile they worked on developing "a menu that honed in on making the perfect classic cheeseburger."

They hit the road in 2012, usually at Boardwalk on Bulverde, The Point Park & Eats or The Block, and by mid-2013, the truck was in the sights of Cooking Channel's food truck show "Eat St." For their December taping, the truck cooked up some favorites, including their smoked turkey caprese sandwich, their chipotle-braised pork sliders with red cabbage slaw and the Hot Carl, which Samia calls deceivingly flavorful.

The burger starts with a buffalo sauce-marinated patty that's seared and topped with lettuce, mozzarella and a house-made jalapeño ranch. It's simple, twisted takes on classics that help Crazy Carl's stand out. Take for instance The Luther, which calls for a bacon cheese Carl burger between a glazed donut bun. It's sweet and savory and Samia and Reed's way of looking at culinary restraint in the face and laughing.

Though only the smoked turkey sandwich will make it on to the Dignowity Meats menu board, fans of Crazy Carl's should expect that same care of ingredients at the eatery. In the meantime, they're working on perfecting recipes for pastrami, pit beef, pork belly and smoked bologna, as well as sinful sides (sharp cheddar mac 'n' cheese, anyone?).

"We're going to try blending both of our backgrounds to create good smoked meats and classic homemade sandwiches, the right way," Samia said. "We're taking the meat from the first step through the finished product."