Crazy Spices and Low Prices at Thai It 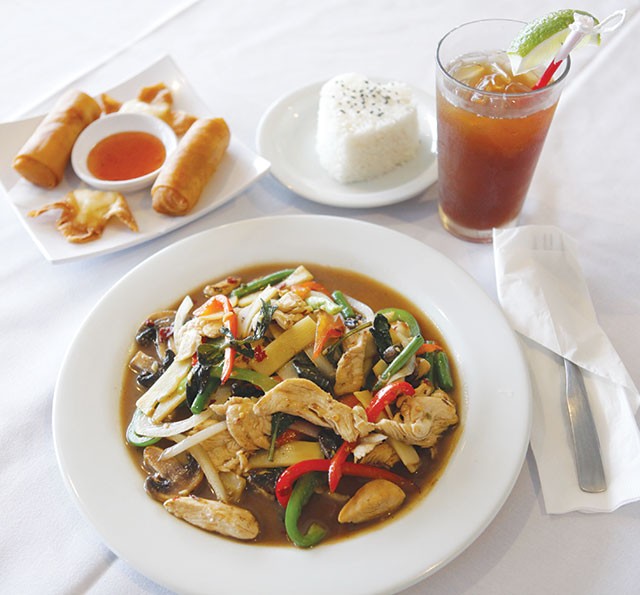 Confession: I’ve had some of the best Thai out of tiny strip mall joints. Thai Taste off Evers and Thai Topaz off Huebner were haunts during college for their ridiculously cheap lunch specials. So, maybe I was a bit biased when I drove up to Thai It for my first visit. There was an evangelical church, a hair salon and an income tax office to the left, and a nail salon on the right. A La Michoacana, of all things, anchored the center. It was almost too easy to miss Thai It, an off-shoot of Thai Corner, with its demure signage.

Our first stop was for dinner. The inside of Thai It featured a hodgepodge collection of décor, with carved wooden doors, a few possibly faux plants and a smattering of framed Thai postcards along the back wall accompanied by an indoor crimped tinfoil awning strewn with neon lit lanterns. A wall of mirrors made the restaurant appear larger than it was and did the ambience no real favors by doubling the perceived amount of empty tables.

We settled in to our oversized booth and ordered chicken satay to start. Our skewers could have used a bit more turmeric and were slightly overdone, but the chunky peanut sauce was pleasant and sweet. Paired with a tart cucumber salad, the satay was a so-so start.

A quick note on spice level: Thai It gets points for its cheeky numerical order. A one is a starter, two is “let me try this,” three is “I can handle it,” four is “feeling the heat,” five is the charming malapropism “break my sweat” [sic] and an un-refundable six is a “Thai Taste,” which is similar to the “true Thai” heat visitors to Thailand may have seen or experienced—the type in which a giggling Thai waitstaff peek out from the kitchen to see if the farang (foreigner) is reduced to a watery eyed, milk-drinking mess.

Our entrees were par for the course. I settled for a pad woon sen with a spice level three. Equal parts glass noodles and vegetables, the hefty dish (I boxed up half) treated each component with respect. The chicken was well done without being tough, the veggies were crisp and the spice level was even throughout—no accidental mouthfuls of chile. The sliced carrot hearts, a pre-Valentine’s Day homage, were a cute touch. The spicy basil stir fry was hot … but not as fiery as my dining partner had hoped. The heat was smoky and came through with the each bite of string beans, bamboo and tomatoes.

While it may have cleared up my sinuses, heat is subjective and left my partner underwhelmed.

A lunchtime visit proved a little busier for Thai It. At $7.95 for any lunch special with soup, choice of appetizer and iced tea, it’s a shocker that more folks aren’t lining up to, well, try it.

We sampled the fresh spring rolls, but landed our first misstep. An uncooked wonton wrapper enveloped shredded carrots, cream cheese and celery, which led to a few confusing bites. It’s a shame, the tamarind sauce used over the rolls was actually quite good. The soup du jour contained bits of carrots, chicken and flat noodles … but could have used some salt.

Things fared a lot better with our entrees. I settled for a panang curry, again at a three, and was pleasantly surprised. The portion was huge, and the creamy panang was peppered with dry chile flakes. My lunch partner opted for the garlic chicken with red and green bell peppers and thick strips of onion.

The garlic sauce was bright and aromatic, but also light enough to not overwhelm the vegetables.

The dessert menu has standard mango sticky rice and fried bananas, but I decided to cleanse my palate with a bubble tea. Although I would have preferred a smoother consistency—the ice was a bit too chunky—I could have done much worse with the bubble-filled, sweet avocado drink.

While it’s not earth shattering, Thai It does offer a solid take on Southeast Asian treats at outrageously low prices. Maybe its quirky neighbors are holding Thai It back from attracting hordes of customers, but then again, who wouldn’t want to get their taxes done after noshing on some stir-fry?