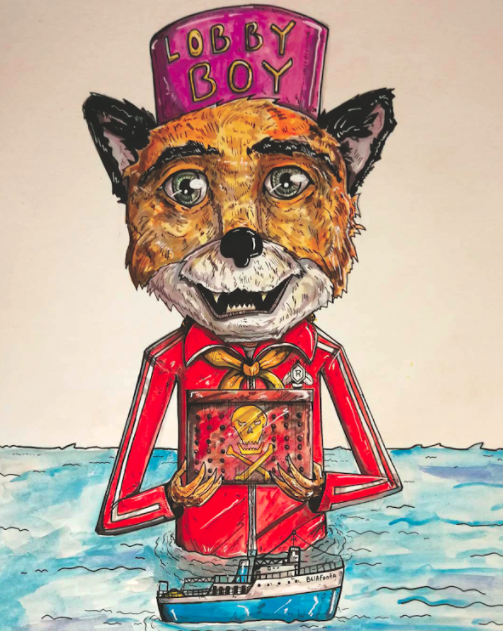 Beyond the eccentric characters and quirky storylines that give most of Texan Oscar nominee Wes Anderson’s films instant cult-classic status, his singular sense of aesthetics makes them a joy to rewatch — with idiosyncratic details often bubbling to the surface over time.

Based in no small part on his stylistic continuity and the actors who consistently appear in his films (Bill Murray, Anjelica Huston, Owen Wilson, Tilda Swinton, Adrien Brody and Jason Schwartzman among them), it’s not uncommon to come across terms like the “Wes Anderson Universe.” Inviting a local interpretations of oddballs such as Max Fischer (Rushmore), Margot Tenenbaum (The Royal Tenenbaums), Steve Zissou (The Life Aquatic), and Zero the lobby boy (The Grand Budapest Hotel), Creative Creatures’ “In the Style of Wes Anderson (Act II)” takes shape in a group show showcasing more than 20 artists working in a wide array of media.

The first full-on exhibition husband-and-wife duo Eddie and Karen Rios have hosted since opening their Creative Creatures artsy retail shop, the First Friday event offers both an update of a 2014 gig they threw at the Ten Eleven and a “pre party of sorts” for their upcoming fourth anniversary bash (January 13) at Brick.