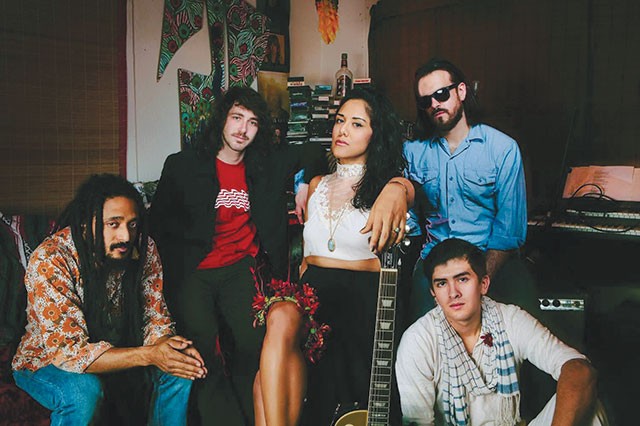 San Antonio’s own Creatura, a power-packing psych-rock quintet led by singer-songwriter and guitarist Divina (aka Emma Felicia), has developed a unique and mesmerizing sound in its short life as a band. Born in June 2013 through the type of serendipity that is almost enough to make a determinist out of me, Creatura has been melting faces and entrancing San Antonio audiences ever since.

According to Divina, the band began one June day last year while she was working at Krazy Kat Music. “Jeff [Olivares, bass], Marc [Smith, drums] and Andrew [Salinas, cello] had come in looking for a few things and I asked my boss if I could jam with them,” Divina told the Current over the phone last week. The connection between the three proved so powerful that they agreed to set up a practice soon and Divina, a singer-songwriter with a giant voice who had long yearned for a full band to play with, found what she was looking for.

Adding to the aura of synchronicity, Creatura’s formation occurred just a week or so after a conversation Divina had with Black Angels guitarist Christian Bland. In a chat that Divina now thinks of as “a kind of premonition,” Bland told Divina to trust her instincts when it comes to bandmate compatibility and, above all, to have patience in her search for a permanent group. In light of this conversation, her meeting with Olivares, Smith and Salinas—and guitarist Andy Suhre just a few days later—seemed like a fated arrival to Divina. By the end of the band’s first real practice as a five-piece, all involved understood that they had stumbled into something truly special.

Now approaching the first anniversary of that Krazy Kat jam, Divina and company are ready to present their debut EP, Open the Door, at Hi-Tones on Friday. And let me be the first to tell you: This thing is a beast. The six tracks on Open the Door, recorded at Roadhouse Rags in Austin, are expansive, liberating rock songs that haunt the mind with their shrieking peaks, ominous valleys and breathtaking tempo shifts. Written predominantly by Divina and guitarist Suhre, with the other members inventing their parts together in “structured jam sessions” as each song took shape, Open the Door feels old and new at once, fusing elements of surf, ‘60s psych and folk with more contemporary sensibilities.

Divina tells the Current that half of the songs on the EP are reworked, fleshed-out versions of older solo songs and half are wholly new and written as a full band. The older tracks (“One Day I Died,” “Maybe” and “Peace”) are filled with a sense of fertile emptiness and truly showcase the thick and rich textures of the singer’s voice, a powerful instrument among powerful instruments.

In talking about her unique and raggedly beautiful vocals, Divina confesses that she’s “not really into many female singers, but typically [likes] forceful male vocalists like [Jim] Morrison or Robert Plant.” She continued, “I love singing loudly because to me [singing is] like a form of prayer and it’s important for it to be emotional.” And that’s exactly what this EP is—a raw, emotional whirlwind of prayers and dreams and noise and wild earth-dance and suffering. It is an immense debut.

The songs on Open the Door were almost entirely live recordings with “very few overdubbing sessions.” As such, they give an excellent indication of the powerhouse that is Creatura in concert. A band with a unique ability to collaborate fluidly and slide gently from challenging chaos into elegant order, Creatura has become one of the most exciting live acts in San Anto.

On Friday, a special affair for SA/Austin psych-rock, they’ll perform amid a host of other local, like-minded notables in celebration of the EP release. Austinite lo-fi outfit Low Times and SA’s shapeshifting and heavy Flower Jesus will also be celebrating the release of their new split EP Cosmic American Music. You’ll need to check out the progressive and cinematic sounds of SA’s Crown, the downright freaky and folk-infused experiments of Antique Sunlight (a Flower Jesus offshoot) and the jangly tie-dyed-dream grooves of Austin’s The Wolf as well. Come to think of it—you’ll wanna catch all of these bands. Eat your brownies and get there early.