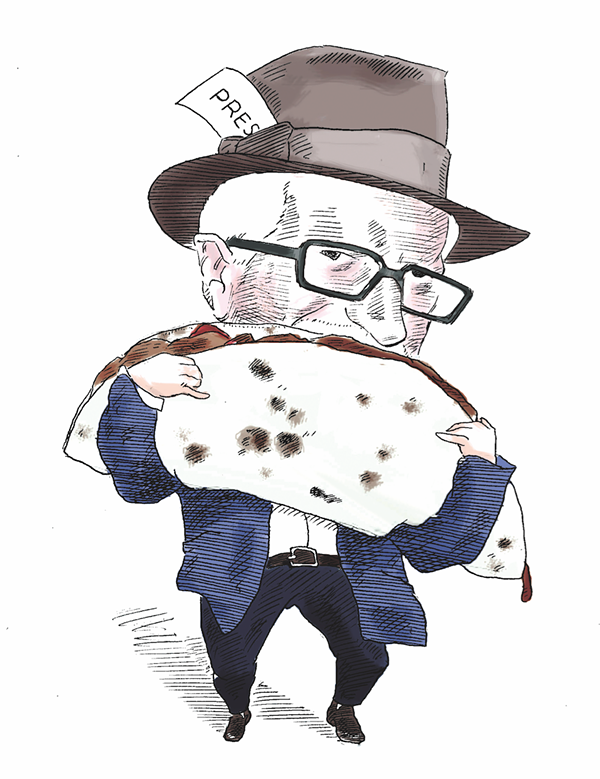 To put it succinctly, Ron Bechtol doesn’t quite remember when his first review for the San Antonio Current was published. He first dabbled as a food critic in 1979 for San Antonio Magazine (no relation to the current iteration of said publication) before it folded in the early ’80s and later wrote for the San Antonio Light before it went out in 1993. Bechtol began freelancing for the San Antonio Express-News through the ’90s before eventually joining the Current some time after that.

He’s seen editors come and go, and has a fair share of reviews, along with food and wine trend pieces that’ll take more than a minute to recall. These days, he’s still eating his way through San Antonio with the same blink-and-you-might-miss-it sass I recall reading as a college student in the mid-2000s. An architect by trade, Bechtol, along with a few others, shared a front-row seat in watching San Antonio’s food scene blossom and even had a hand it in himself (see his time with the New World Wine & Food Festival, the organization that preceded Culinaria). Here are some of his musings ...

When did you first start writing?

My first review ever in life was Josephine Street, which was interesting because it’s still there and hasn’t changed. In the beginning, oddly enough, everything of interest was pretty much off Broadway. It went from La Louisiane, which was the posh place with Greek influences on Creole French. A snapper with artichoke hearts and mushrooms was kind of the height of luxury in San Antonio at that time. I wrote about them first for SA Magazine as Underground Gourmet. It wasn’t until I started working for the Light that I started using my real name, which was a bold move at the time.

It didn’t change the way I reviewed, but it made it so that when I did run a review of La Louisiane that they considered maybe not so flavorable, I was told they found a picture of me and stuck it behind the kitchen door with instructions — do not admit.

Do people recognize you more then or now?

I would say then because the industry was smaller and people didn’t move around quite as much. Everything is more mobile now and there’s more of it. Any of the restaurants that were beginning to develop of name for themselves, they knew.

What were some of the other  hot spots?

And everything ended at Earl Abel’s, which was the place for chicken, and everyone went there — from Alamo Heights to King William, everywhere — that’s where they went for fried chicken. That was the breadth of culinary experience in San Antonio with the exception of the private clubs — The Argyle and the country club, places like that.

Places like Mi Tierra had started expanding. The Mexican seafood places weren’t really on the radar yet, nor were there any  authentically Mexican places. Places like Rosario’s changed the equation, too, because they started bringing in things that weren’t the typical Tex-Mex enchilada No. 2 fare.

I was also thinking of people like Guillermo Ardid, who started attracting an audience from Handy Andy by introducing baguettes and croissants to San Antonio. One day a week he would hold court and do cooking demos and send out recipes. He was an utterly charming guy, this great raconteur. He made French, which was still fancy, accessible. Guillermo moved over to this place off McCullough where he was until he retired.

Grey Moss Inn was the place to go for special occasions. It was our steakhouse in addition to The Barn Door. You tend to think of it as a sacred place and not think about the food, which is never terrible but it’s not totally inspiring either.

Early on I remember reviewing The Fig Tree and Little Rhein, which were the posh places to go on the Riverwalk. They began to push an awareness of wine, which happened at the same time with the hotels that began being prominent in San Antonio. The Plaza San Antonio, now a Marriott, had a French chef, and a forward-thinking food and beverage director and they started doing wine dinners. Palacio del Rio did theirs, and that was more of a steakhouse kind of place, but it had pretentions. Then there was Joe Cosniac who opened Paesano’s and changed red carpet Italian. There’s also Francois Maeder who purchased Crumpets. It was another way of looking at French and in its early days it was a restaurant worth paying attention to. It’s one of those time capsule places like Josephine Street.

I think it certainly does. How else would a place like Hung Fong survive through the years?

When did San Antonio start seeing a spike in international cuisine?

San Antonio comes by it pretty naturally by way of the military bases. Wives of military, coming back to San Antonio from misadventures in Korea and Vietnam and Thailand. Those restaurants started pretty much around Fort Sam. There’s Snow Eisenhauer who had Viet-Nam on Broadway, which was subtitled something like "crab seven ways." For lots of people, certainly for me, that was our first taste of Vietnamese. It had a lot to do with the air force bases. I’m pretty sure the Medical Center is responsible for bringing in and encouraging a lot of the Indian, Pakistani population because of the medical personnel. My friend pointed out SaniFresh, a company that hired a lot of Asian workers. Van, who ended up on Broadway, was also up there.

Were eaters as fanatic back then?

I think we have to look at that from the standpoint of connectivity. People weren’t on Facebook in the early ’80s. You got your information from word of mouth or the traditional sources — magazines and newspapers. So when Polo’s opened in The Fairmount in 1985, that was one of those landmarks, a game-changer in San Antonio. But it was a fairly slow one because of the media outlets available. Through that kitchen cycled a lot of chefs, Bruce was a mini CIA at the time. People like Mark Bliss and Mike Blomberg went out and slowly spread the gospel.

So after Bruce and Andrew Weissman (who received nods with Le Reve in national publications), when did the fervor for a food scene pick up?

You mean, right before Pearl? Here’s the interesting thing:  It’s not necessarily that there’s any one restaurant at the Pearl that's that influential or that the Culinary Institute of America-San Antonio itself has produced someone wildly influential … yet. That’s a slowish process, but I think it’s a question of look what’s here now, both internal (us) and external (other people paying attention to us). It acts like an implicit springboard, whether or not everything is springing from there.

When did you realize food was such a big deal?

I’ve always looked at it from the standpoint that I’m writing for a traditional outlet and I try to actively avoid Twitter and Facebook. I’m not the best person to say when it became frantic…

What are some of your eating patterns?

I’m kind of a binge cook. People would be surprised at how simple I eat at home. But when I have someone to cook for or an event, then it’s kind of like no holds barred. I think a critic has to cook, you really have to do it.

What would you recommend readers do?

I’d suggest they get out of their bubble, whatever it is. Both food and geographic bubbles. The north siders that won’t venture downtown need to get down here because way much is happening here and in Southtown, though for a time it looked like things were going to be centrifugal, but it’s more centripetal it turns out. Get out there. If you’ve never had Indian, go to Royal Cuisine. Find a good buffet where they freshen up the food often and use it as a starter.

What are some of your pet peeves?

Non-seasonal items masquerading as farm-to-table … overuse of farm-to-table pisses me off entirely, as do badly described dishes… bad menu writing. Another pet peeve is people that post menus online and don’t keep them up to date. I sometimes do it to myself at times, but when we’re getting too much attention or too little attention and then suddenly you can’t find them when it’s time to check out.