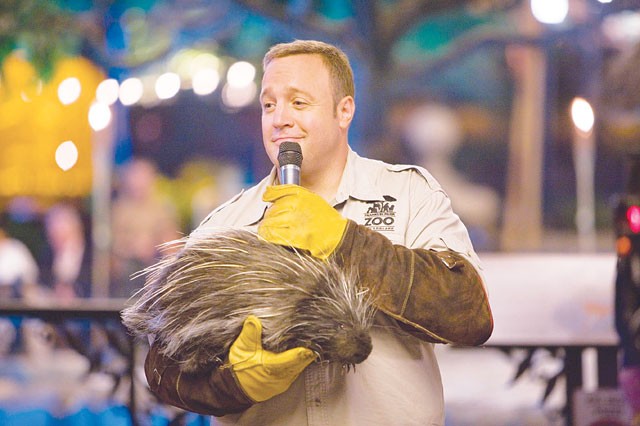 Deep inside the ferocious land of Hollywood, gazing around the talent pool like a fat warthog at a watering hole, a stumpy beast hunkers down waiting for a screenplay too weak to defend itself. His eyes dart back and forth as other more agile predators pick off the meatier scripts one by one. Suddenly, the creature gets his chance: A scrawny offering has been separated from the herd. Within seconds, the brute leaps. His broad calves push him forward for the kill, but it isn’t meant to be. His feet catch in the brush and he lands face-first in the mud.

If the Discovery Channel ever featured a Kevin James Week, that’s about how the narration would go.

Unfortunately for audiences, James, best known for the TV series The King of Queens, which ran for nine seasons before ending in 2007, gets his paws wrapped around more flimsy screenplays than anyone who likes to laugh would hope.

Despite his terrible movie choices over the last four years (I Now Pronounce You Chuck and Larry, Paul Blart: Mall Cop, Grown Ups), James is as harmless as a collection of chubby cherubs, which is one reason he continues to get second-rate roles in comedies like Zookeeper, another dismal product from Adam Sandler’s Happy Madison production company (AKA Rob Schneider’s meal ticket).

Directed by Frank Coraci, who delivered one of Sandler’s best movies with The Wedding Singer, Zookeeper takes a page from another James flick, 2005’s Hitch. Instead of taking dating advice from Will Smith, however, James, who plays insecure lead zookeeper Griffin Keyes, is schooled in the subject of love by a zoo-full of chatty wildlife. Voice work includes Sylvester Stallone as a discerning lion, Nick Nolte as a depressed gorilla, and what sounds like a constipated Sandler as a capuchin monkey.

Although it might sound like another Charlotte’s Web wannabe, the talking animals don’t make up much of the story — that centers on Griffin trying to win his materialistic ex-girlfriend back. In one unfunny scene, a wolf explains that a male mammal must mark his territory to get the female’s attention, leading Griffin to relieve himself on a potted plant at a dinner reception.