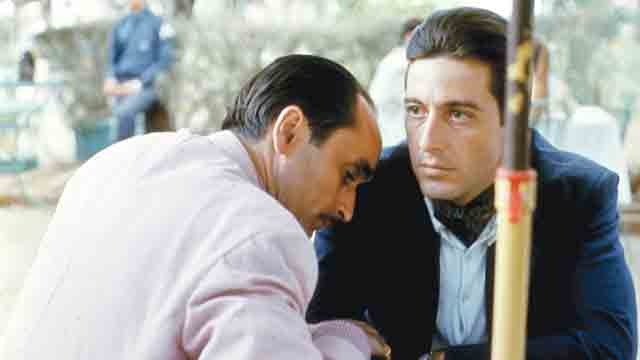 “I could make five failures, and I’d still be the guy who directed The Godfather,” Francis Ford Coppola, who reportedly refused six times to direct a sequel to his gangster masterpiece, once said. “There’s only one way to undo that fast, and that’s to attempt to make another Godfather, and fail. If it bombs, then people will look at the first Godfather and say it was all [Marlon] Brando, or whatever. If I took my career to an insurance actuary, he’d tell me to lay off the sequels if I wanted to stay healthy.”

But Coppola finally changed his mind when Paramount gave him an offer he couldn’t refuse: financing for The Conversation (1974), a million-dollar salary, a cut of the gross, and complete creative control over the Godfather sequel. Not a bad deal for a guy who wasn’t even a third choice to direct the first one. But Coppola’s first Godfather set a new standard for gangster films, and its sequel is just as good, if not better.

The Godfather: Part II is closer to the original book by Mario Puzo in that, unlike the first movie, it follows Vito Corleone’s journey as a little boy from Sicily to New York in the 1910s. We see a young Corleone (played by Robert De Niro) transition into the Don, and the movie jumps back and forth between the first days of the Corleone family and the days of the 1950s when the family is run by the ruthless Michael (Al Pacino). We follow Michael from New York to Vegas and ultimately land in Havana the night Fidel Castro’s revolution succeeds. It is there, in Havana, that the movie offers a memorable, rare film appearance by acting guru Lee Strasberg as crime boss Hyman Roth. It is one of the many highlights of a film that dared to prioritize deep character studies over the more concise, straight storytelling of the equally masterful first film.

The Godfather: Part II won six of 11 nominations, including Best Picture, Best Director, Best Adapted Screenplay, and Best Supporting Actor (De Niro). Simply put, this is the most successful sequel ever made and, like any other masterpiece, it only gets better with repeated viewing.