Crocodiles as we know them today have roamed the Earth for about 80 million years. With this staggering history comes an endless assortment of baggage to unpack — from fear and folklore to myths and misinformation. Associated with ancient deities and dragons, immortalized in Disney classics (who can forget Tick-Tock, the alarm-clock-swallowing croc from Peter Pan or Madame Medusa’s devilish pets Nero and Brutus from The Rescuers?), unwittingly thrust into the spotlight by late zookeeper Steve Irwin’s hit TV series The Crocodile Hunter and factory farmed right here in Texas for skins sold to luxury handbag manufacturers (we’re looking at you, Hermès), the largely misunderstood beast finds a unusual platform this spring in “Tooth & Claw,” a multimedia exhibition hosted by UTSA’s off-site gallery Terminal 136. 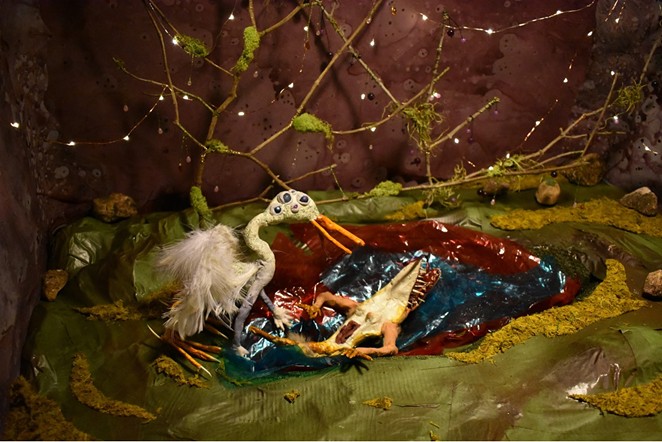 Curated by Angelica Raquel Martinez with an eye on “the many interpretations of crocodilians,” the group show assembles diverse works by seven artists: John Atkins’ project Gatorly Complex comments on the commodification of animals and questions the definitions of predator and prey; Roberto Benavides marries the unlikely concepts of piñatas and “medieval illustrations of mythical beasts” while also exploring his cultural identity; Sarah Fox’s short horror animation stars a “gator girl” who challenges the “patriarchy’s ignorant fear of female sexuality”; Rachel Gardner dives into “the secrets of the swamp” to revisit childhood sightings at ponds and parks; Loc Huyhn comments on absurdity and the sideshow that is Trump’s America in the socio-political pieces Drain the Swamp and Florida Man vs. Alligator; Jules Buck Jones conjures a hybridized dimension informed by natural history, supernatural elements and “anthropomorphized landscapes”; and the curator herself furthers her creative investigation of crocodilians as pests, predators and an “unchanged marvel of evolution.” Free, opening receptions 6-9pm Thu, May 2 & Fri, May 3, on view noon-5pm Thu-Sat through May 18, Terminal 136, 136 Blue Star, (210) 758-6246, art.utsa.edu.