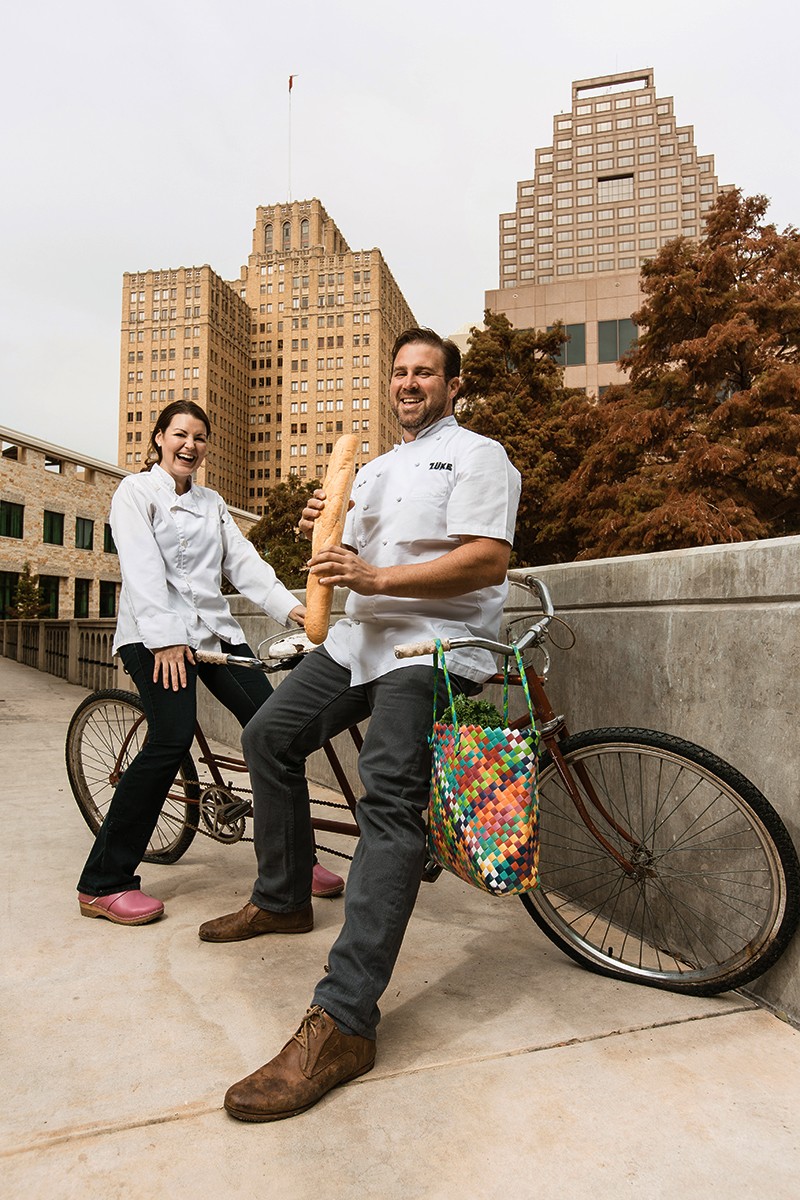 Here's a fair warning: This article could very easily dive into cheesy territory at any minute. Elise Broz, the statuesque brunette with the twinkly eyes that helms the pastry department at Biga on the Banks, and John Russ, the dark-haired, blue-eyed N'awlins-bred executive chef at Lüke San Antonio, are a scratch-made match made in food heaven. If they were any more adorable, they'd be straight out of a Disney classic.

Although they're set to be married next October, the pair of chefs had an unlikely start.

"She hated me. I was semi indifferent," Russ said during an interview with the Current at Lüke. "It was oil and vinegar."

We managed to get the couple to sit down and talk about their relationship, a feat on its own as both keep quite busy, but we'll get to that in a minute.

They met at The Inn at Perry Cabin in Saint Michaels, Maryland, where Broz's father served as general manager, Russ was executive sous chef and Broz was pastry chef. "I would say we didn't get along," she said.

"I'm very focused at work and I don't have room for distractions," Broz continued. This eventually changed, as is wont to happen, prodded along by the teensy town they occupied. St. Michaels' population just barely tips the 1,000 mark and, as Russ put it, "There's two bars—one for the old folk and one for younger people." Several hang sessions later, over Dark and Stormies inside Broz's apartment, the initial cold shoulder turned into something more.

Four years later, Broz and Russ have made the Alamo City home after he was offered the executive chef position at Lüke San Antonio. But how exactly do they keep things mostly harmonious while in the chaos of busy kitchens? Even in the sleepy waterside town of St. Michaels, the pair was pulling 16-hour overlapping work shifts.

"We were learning each other's personalities [in the first eight months prior to dating officially]," Russ said. "We were basically figuring out what we liked, what we didn't like and we got past that because we understand each other's strengths and weaknesses."

For Broz, a seemingly Type A consummate baking professional, these strengths are being a "tremendous organizer." According to Russ, "She does a great job at keeping the logistics together."

Broz's take on her betrothed are that he can take on any kitchen challenge, even if there is no discernable stove. "You could blow the kitchen up and John would be fine. His strength is being able to build a kitchen anywhere, out of anything, anytime."

The second is a rule they implemented during their early days of dating—there'd be no talking about work while at home.

"We set how much time we could talk about work each night and after that it was over," Broz said.