Chef Steve McHugh during the early stages of Cured. (Photo by David Rangel)

The Pearl's newest restaurant is about ready to open its doors. Already in a quasi-soft opening stage (they're open for friends and family services through December 27), Cured will be open for dinner on Saturday, December 28 with its menu of charcuterie and regional ingredients cooked in organic methods.

Chef Steve McHugh, previously with Lüke San Antonio, has been working on the restaurant for just over a year. He talked to the Current about the process and what diners should expect when they stop in.

On getting the restaurant ready: We get to a point where we feel like we're ready, but then there's last minute stuff. Little things. The place looks 99 percent done and then you find that outlet that needs to be covered. We're gathering little pieces, because we want it to be perfect.

On refurbishing a 100-year-old building: It's a delicate little thing. A lot had to be thought out in advance, planned in advance perfectly. This building is over 100 years old, we had to take into consideration a lot of those aspects. There's an old bank vault with beams. The building is attached to a new building (where the kitchen is located), which is great, but how we connected those two in a way that made it look like they're not connected...I'm a functionality guy. I want things to work, and if they don't it really bothers me. 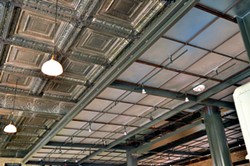 On the building's history: There are so many things here that have a story, it's amazing. We had all the panels dipped in acid to look like the original. We worked with W.F. Norman Corp. who did the original presses for this ceiling (to make the same prints). We have a beautiful meat display (it's about 9-by-11 feet wide) filled with a wall of hanging stuff. Architecturally, there are so many little details. The bathrooms are located in the new part of the building, and we pay homage to what it used to be, the original administration building for the Pearl. The men's room sink is made out of an old metal desk; the women's room has old cabinets on display. There's so much for your eyes to see.

On the menu: There are 20-22 items on the menu, which will grow, but we're dealing with a new staff, new cooks...I want to put them in the best position to be successful and not bury them where they can't keep up with the food and menu.

On opening in food-crazed SA: It's kind of scary. Regardless of what chefs are doing, people are getting smarter, they're developing better palates. People are traveling more. In San Antonio, people are so excited about new restaurants coming in, I would never have done this if I thought people wouldn't get it. It's tricky to open a restaurant, but I've done it enough times...I'm excited to have them in here to see what it is we've created.

On his new obsession: I don't know about hobbies. It's funny, I spent a lot of time, perusing, going through online auctions for restaurant equipment. I have a budget, so I had to be discerning about everything we bought. The back of the kitchen is full of used oven grills. It's addicting. I'd come back from Houston with a truck full of whatever: pots, pans, spoons. I was a little addicted by it. There are a lot of good deals!. Even now that I don't need anything, I still look at the online auctions.