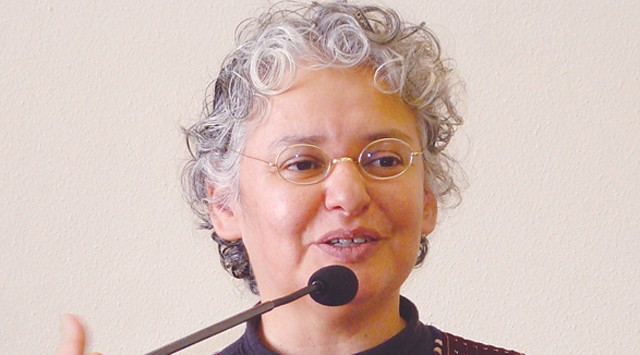 Anytime an organization intentionally wraps itself in the flag of disenfranchised Latinos, blacks, transgendered, queers, and feminists, you know there’s a rocky road ahead. When that organization is coming to life in 1980s San Antonio, you can expect a double-helping of rocks.

The Esperanza Peace and Justice Center was born in the culture-clash of 1987, fashioning itself as a hub for all manner of social and political causes that had human rights at their core. And its story, in many ways, has tracked the path of progressive thought in San Antonio, the state, and the nation over the past quarter-century. It’s a protest-filled history sparking derision and hate, but also respect and social change.

From the beginning, the Esperanza’s identity has been tough for some to really understand, said director Graciela Sánchez. “People, throughout the years, have had a hard time putting a handle on us — are we lesbian, feminist, gay, Latino? What are we?”

The Esperanza, she said, drew on the idea that art can be the vehicle for social change, used to unite disenfranchised and marginalized groups from across the spectrum under the banner of social justice. “For us, it was like a collective cause. It’s like asking people to just pick one identity — like looking at a person, there’s not just one [cause] that makes us who we are.”

And as an out lesbian, a Latina, and a feminist, Sánchez’s very own identity was enough to anger right-wing religious groups from the start.

One of the group’s first exhibits in the late ’80s explored AIDS and its impact on communities — at a time society was still largely ignoring the problem. They showed films telling the real, suppressed story of U.S. intervention in Latin America. In 1991 the center hosted noted queer artist Marlon Riggs to screen his film Tongues Untied, which sparked a vicious conservative backlash both locally and nationally. Having premiered in San Antonio, the local PBS affiliate was one of the only stations in the nation to actually screen it.

With a reputation for tackling the controversial with a blunt voice, Esperanza’s penchant for protest via art eventually spun into a court battle with the City of San Antonio.

By 1997, a bizarre, but no less powerful, convergence of Christian-right activists and local conservative gay men began to rally around the group’s lesbian and gay film festival, “Out at the Movies,” pressuring the city to strip the group’s local arts funding. Evangelical activists began to pack city meetings and barrage council members’ with accusations about city money supporting “deviant sexual behavior.”

“We’ve always been a hub for all these movements, for minorities or any disenfranchised group, and connect them to each other,” Sánchez said. “It’s always been funny to me that we could be seen as threatening, that they would demonize us or be afraid of us.”

In September 1997, the city singled out the Esperanza and the group suffered a near-fatal blow as city funding went from $60,000 to zero.

Sánchez viewed the move as an expression of the national Culture Wars finally hitting San Antonio, a movement that gathered steam between the mid ’80s and ’90s seeking to defund the arts nationwide. At the time, she said, the city’s actions put a chill on city-funded art groups who feared the city could then strip their funding should they ever stray into the potentially controversial territory. “I remember we sued on principal, not really thinking we could win,” she said.

As the lawsuit unfolded, it became clear then-Mayor Howard Peak was helping guide the defunding effort, flaming outrage on the Christian right and garnering support from a network of local conservative gay men, Sánchez said, eventually sealing the defunding deal in a closed-door meeting with the council.

Three years after the Esperanza went to court, gaining national attention along the way, Federal Judge Orlando L. Garcia ruled in the group’s favor, saying that the city’s actions were unconstitutional and that local governments, once they choose to funnel city money to arts and cultural programming, cannot discriminate based on ideology. The decision has been hailed as a pivotal victory for area arts organizations ever since.