Current 25: Shawn Sahm talks about the man who personified the best of Texas music 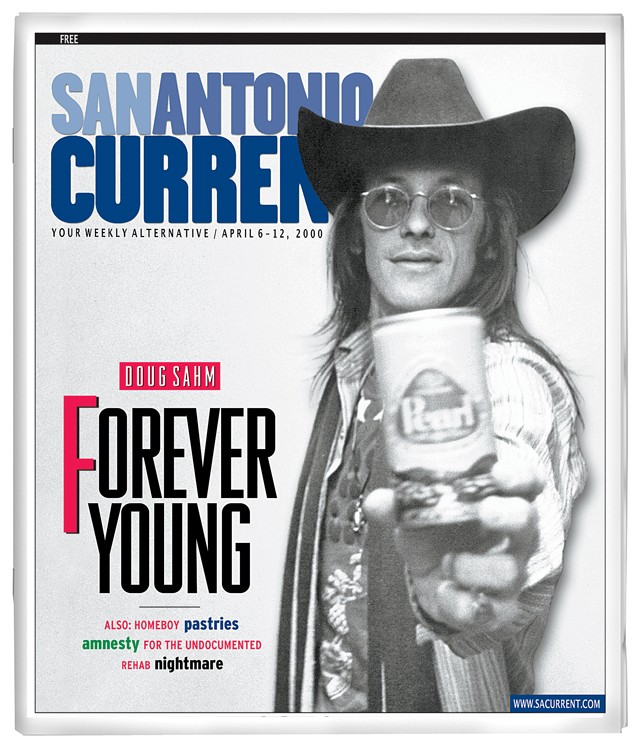 When Doug Sahm unexpectedly died on November 18, 1999, he left a huge hole in the Texas music scene. Besides being the undisputed leader of the Sir Douglas Quintet and the Texas Tornados, his work as a solo artist, session musician, and producer is impressive and well documented. But seeing Sahm live, in concert, was it. He called the shots, no matter who he played with. In 2009, 10 years after his father’s death, the Current talked by phone with Shawn Sahm, the son who now carries his dad’s torch.

What are your earliest and latest memories of your dad?

If you look at the cover of Rolling Stone, in 1968, I was on the cover with my dad when I was three. I remember running around in California with Dad. When I was a kid I always wanted to play his gold records. He had a Mendocino gold record, and I always cried because I wanted to play it on the turntable (laughs).

Yes! As a little child I wanted to put on the gold record, and he would say, “No, no! You can’t do that!" Me, Dawn, and Shandon, the three of us and my father were really close.

Right before he passed away, when he was heading out to Taos [New Mexico, where he died in 1999]. This story has gotten changed around a lot, as it happens with people as times goes by. The story gets changed a bit, embellished, but the truth of the matter is this: I live off Hwy. 10, you take 10 all the way right to Taos and right to California. He came by my house on the way to Taos. So my latest memory is him sitting there at the table with me. We were talking about everything, from personal to business stuff, because we had a company together. I remember asking him if he was OK, because it dawned on me that he looked like he didn’t feel well. We thought he might’ve had the flu, and he said, “No, no, I’m fine.” And then he continued on to Taos after staying for a couple of hours. That would be my last memory of him. I remember looking right in his eyes, man.

I remember seeing him twice in L.A. We had gone to see Flaco Jiménez, but your dad stole the show both times. He was amazing.

You know? Flaco is so awesome about giving Dad credit for introducing him to the rock and roll side of things. My dad took Flaco up to New York in 1972 or ’73 for the Doug Sahm and Band record, with Bob Dylan, and Dr. John. That really introduced Flaco, and these are Flaco’s words, that really introduced him to a whole new world. He said, “Shawn, your dad was the one who said, ‘You can take what you do and bring it into my world, and play the rock and roll with the accordion. The accordion is an instrument that has no boundaries.’” When you think about it, Dad and Flaco getting together, having that conversation, that was a quintessential little moment, wasn’t it? Of course, Dad and Augie [Meyers] were doing that for a long time as well. You can hear tracks like “Nuevo Laredo,” from the [Sir Douglas Quintet’s 1970] Together After Five album … Those were quintessential Tex-Mex songs. We still play “Nuevo Laredo” today, and that’s Tex-Mex to the bone.

Musically speaking, what did he teach you, specifically?

Honestly, at the end of the day, I got it all from him. You learn from a variety of sources, you always do. I learned from the Rolling Stones, Led Zeppelin, the Beatles …  hell, old-school Elton John. I’m trying to paint different pictures of music styles. I like all kinds of different styles. But the things you grow up with seem to be the things that matter most. And I would be lying if I said that it wasn’t Doug Sahm’s music that has been embedded the deepest in me since I was a child. I mean, the first song I learned to play was “Mendocino.” You can see my baby books, where my mom would write it. I was just obsessed with my dad’s music. I always wear his influence on my sleeve, and rightfully so. It’s my father, and it would be ridiculous for me to deny it. At the same time, I also think I have my own things to say, and I write my own songs. Me and Daddy used to write songs together all the time. He used to call me his “own little songwriting machine.” One day I had this song, “One and only,” that the Tornados cut. The very beginning of the song was very similar to one of his songs. So he said, “Hey, son, that’s a great song, man! I think you got that one line from me, man!” I said, “Pop, you kidding? I got them all from you, man!” So he hugged me and said, “That’s my boy!” He’d also tell me, “When we sing harmonies, it all sounds like just one voice.” And I would say, “Well, it is, pop!” And he’d give me a hug.

What do you think would have been you father’s reaction to the new Tornados album you produced?

That’s a very good question, and me and Augie had this conversation before. We both think Dad would freak out, he would absolutely love it. When Freddy goes… [he imitates Freddy Fender’s singing], Dad would just be jumping around the room. He would’ve loved this record.

The album includes an unreleased song by your dad. Any more unreleased tracks for the future?

Oh, yeah … but we don’t just want to put stuff out: We want to put great stuff out, and we have plenty of them. It will all see the light of day at the appropriate time.

Augie told me that your dad had high blood pressure, and …

Well … that’s kind of assuming a lot. Augie has been telling the story that [Doug’s] girlfriend called and there was no answer … I’m actually the one that called his girlfriend and gave her the news.

You know better than me: Augie loved your dad. But his memory sometimes …

Oh, no, me and Augie are family too. We’re real close. But sometimes I have to tell him, “No, Oogie Boogie, it didn’t happen like that … ” And he goes, “Oh, Shawnee, OK.” Sometimes stories get turned around. The truth, or the simple version of the truth is this: Remember that I told you that at my house [Doug] looked like he had the flu? Well, he’d been sick all week, apparently. Here’s the real version. I mean, yes, he did sit in a hot tub, but it was more than just that.

In hindsight, he may have, but he never discussed this with us. A lot of the shit we found out kind of, you know … he had a little problem with his finger, little issues. We never knew Dad was sick. He was telling Augie he was sick. The truth of the matter is that none of us knew. No one can tell you they knew Dad was sick and that he was going to pass away. It was a shock to all of us. He had some little health issues, and age and the flu partly contributed to them. But the truth of the matter is that he was sick from the time he left my house to the time he got to Taos. It was a series of things he did that didn’t add up correctly. He went all week with being sick. I remember him saying, “I’m feeling better.” I even offered to come get him a couple of times, and he would say, “Oh, yeah, I might let you drive me back down,” and then he would say, “No, I’m OK.” He did have some health issues, but overall he was healthy. It was getting close to 60 [degrees] in Taos, it was getting hot, and things started happening. But none of us knew there was anything wrong like this.