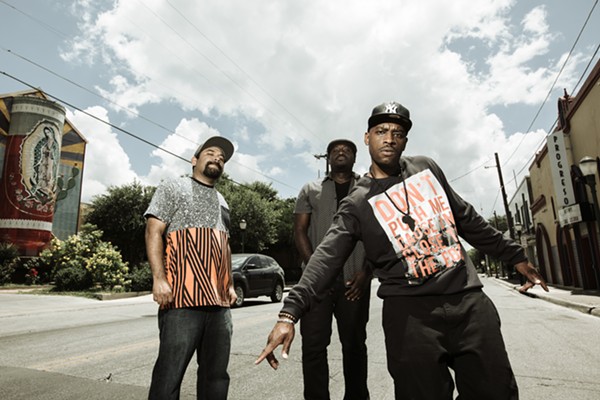 Third Root is the best regional amalgamation of the spirit of Latin America's Nueva Canción movement and the fiercest, most militant type of hip-hop à la Public Enemy. "Yanga's Theme," the third single off Third Root's third album Libertad (Spanish for "Liberty," out October 11 on Bandcamp), has Easy Lee spitting lines like "Tell me how Prince dead, Donald Trump still living" and Mexican Stepgrandfather (Marco Cervantes) nominating himself with "breaking out the settlement, Mex Step for president." The song is based on Nas' 2004 "Thief's Theme" (off Street's Disciple), and you heard it first here at the Current:

"We poured our soul into [Libertad], [and] current events fueled much of the music and lyrics," Easy Lee told the Current. Third Root plans an album release party in San Antonio sometime in November (venue and details TBA, and I don't mean the N. St. Mary's strip bar) and another special SA appearance during MLK weekend in 2017.

The album was produced by Adrián Quesada (formerly of Austin-based, Grammy-winning Grupo Fantasma and still part of its mostly instrumental alter ego Brownout), who played all *most of the instruments and is using Third Root's music as part of his own private celebration: the first 18 months of his Level One Sound studio.

"As a celebration of our first year and a half of being an Austin, TX-based production house/recording studio, Level One Sound will be releasing a slew of singles by bands and artists who have graced the studio since its opening Winter of 2015," Quesada wrote in a statement. "The collection of 15+ songs focuses on covers and reinterpretations decided on between the bands and myself, all recorded in a day or less (sometimes in a couple of hours) as live as possible — spontaneous and relaxed." Third Roots' contribution is "Yanga's Theme."

Among the artists covered by Quesada and his artists: Mazzy Star, Marty Robbins, Prince, Bobby Fuller Four, Mulatu Astake, Mickey and the Soul Generation, and "not one, but TWO songs by Nas (because, well, NAS!) and many more!"

The songs will be released for free stream/download within the next couple of months, according to Quesada. "We know you’ll dig them," he said. "There’s something for everybody."

Judging by the work he did with Third Root, that's a compilation I want to hear. Libertad is a funky, soulful collection of dynamite tracks that include somber memories of Malcolm X ("Bullets for the Truth," complete with a sample of Denzel Washington in Spike Lee's 1992 biopic), and the bilingual "Flags & Body Bags" (featuring Sofy Encanto of Elastic Bond) and other guests like our own Vocab and two guys you may have heard of: Mellow Man Ace ("Libertad") and Fiend. Libertad is a lethal weapon against the anti-immigration, anti-Black and anti-Latino b.s. that more and more seem to be the normal state of things.

"A mix of social justice and jam session," they said in a press release. "Each song [is] designed to raise questions, incite discussion, and promote healing, growth, and liberation."