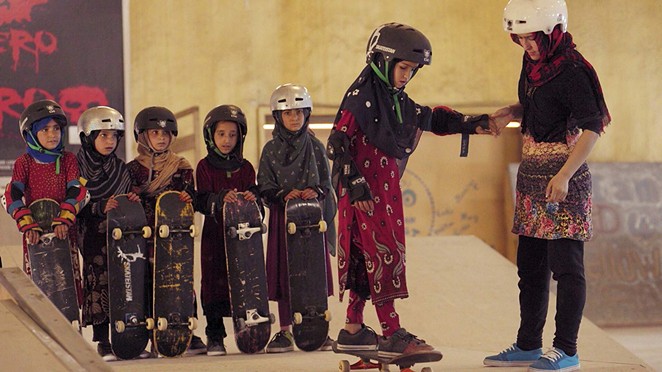 Most movie fans are well aware of the Oscar nominations heavy hitters like Joker and 1917 recently received, but the short films nominated this year deserve love too. With that in mind, the Current reviewed all 15, including animated, documentary and live action.

A program featuring all of them opens Friday, January 31, exclusively at the Santikos Bijou.

From the Czech Republic, Dcera (Daughter) is a stop-motion, papier-mâché-looking animation exploring the fragile relationship between a dying father and his daughter, who suffered from a lack of affection during her childhood. The sad and tender short will hit you at the center of your heart.

In Hair Love, a father squares off with his daughter’s hard-to-manage hair — a job normally left for her mother who runs a hairstyling vlog. The 2-D short is sweet, uplifting and funny, especially when dad faces off against a curly-haired monster.

Kitbull is the third film produced through Pixar’s SparkShorts program for independent animated shorts. The 2-D animation centers around a stray kitten who develops a friendship with an abused pitbull. It’s moving and hopeful, especially if you’re a pet lover.

In Sister, a man remembers growing up with an annoying little sister in China during the 1990s. The story is conveyed rather plainly via narration and stop-motion animation, but it packs a realistic and tragic punch as it addresses the Chinese government’s controversial population policies during the era.

Our favorite in this category is the French stop-motion short Memorable, in which director Bruno Collet takes a creative approach to dealing with the subject of Alzheimer’s. Through surreal imagery and homages to post-impressionist painters such as Vincent van Gogh, Collet finds a beautiful way to express his heartbreaking narrative. Think Amour if directed by Michel Gondry.

St. Louis Superman tells the story of Bruce Franks Jr., a 34-year-old rapper elected as a Missouri state legislator in 2016. The short follows Franks as he works to pass a bill that would identify youth violence as a public health epidemic. It’s telling and touching.

Learning to Skateboard in a Warzone (If You’re a Girl) details the story of underprivileged Afghan girls who are learning to read, write and ride skateboards. Although their country is considered one of the worst places in the world for women, these courageous kids empower themselves to be free in mind and spirit.

In Sweden, hundreds of refugee children suffer from a coma-like illness called Resignation Syndrome, a condition brought on by the trauma and stress associated with the migration process. Life Overtakes Me offers a fascinating and emotionally demanding look.

Married couple Paul and Millie Cao revisit their painful memories of the Vietnam War in Walk, Run, Cha-Cha, a story that explores their current life in the U.S., which includes a shared love of dance. Sadly, the message of lost time doesn’t always resonate through the blending of history and performance art.

In the Absence, the strongest entrant in this category, provides a harrowing look at the sinking of a ferry in South Korea in 2014 that killed 250 high school students. Video footage from inside the boat, audio from first responders and interviews with survivors, rescue divers and parents of the deceased make the short doc somber and impossible to shake.

When an attractive couple makes having sex in front of their apartment window a frequent thing, a frustrated husband and wife start to feel their age in the comedy The Neighbors’ Window. As their eyes continue to linger, the script switches gears to reveal an obvious message about appreciating things one might take for granted.

In Saria, two sisters living in an abusive safe home in Guatemala devise a plan to escape and find refuge in America. The film is based on a true story of a fire in the orphanage that took the lives of 41 teenage girls in 2017. Unfortunately, a fairly pedestrian screenplay prevents it from making a genuine emotional connection.

A woman makes an urgent phone call to save herself from a kidnapper in Belgium’s A Sister (Une Sœur). Unknown to her abductor, she places a call to emergency services and drops hints about her location. The dialogue between the woman and the operator is consistently tense, but the concept itself has been used many times before in other thrillers.

Set in rural Tunisia, the comedy Nefta Football Club follows two young brothers who find a lost mule carrying packages of drugs. The boys decide to bring the white powder back to their village, but each has a different idea on how to distribute it. The short is clever, even if the storytelling doesn’t break much new ground.

Also set in rural Tunisia is our favorite live-action short, Brotherhood, about a family that welcomes its eldest son home after a long journey. Returning with him is his pregnant Syrian wife who wears a niqab, or face veil. Brimming with resentment for his son, the father makes a decision that will likely haunt him. Exquisitely shot, it won’t be surprising if this short is eventually expanded into a feature-length film.