by Alyssa Walker and Jacqueline Fierro 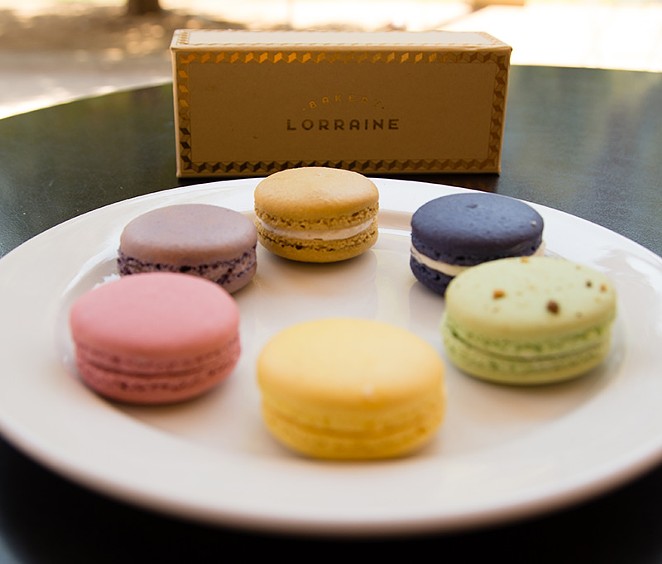 Macarons, an Instagram goldmine. Since they first made an splash on social media, interest has surged about these Parisian desserts. However, if you take the time to sit down and truly appreciate these delicacies, you'll realize that there's so much more to them than their photogenic qualities. To that point, we traveled across San Antonio in search of the best macarons (pronounced ma-cah-ron) and ended up with a surprising, Italian twist to these divine French pastries.

First stop, the adored Bakery Lorraine at Pearl. Though they have the widest selection of flavors, dark chocolate lavender, lemon, pistachio, Earl Grey, raspberry and salted caramel made its way into our six-pack.

The dark chocolate lavender causes an eruption of intense flavors at first bite. The lavender is not shy and the chocolate is there for to balance out the unique taste. If lavender is too much for you, go for the classic chocolate. If you're going for subtler macarons to pair with your latte, lemon and raspberry are the way to go. While all of the flavors packed an intense taste, the Earl Grey and the pistachio stood out. The inside of the pistachio is sweet, yet slightly nutty. Definitely not as nutty as you'd expect a pistachio macaron to taste. The Earl Grey reigns as a fan favorite because of its borderline fruit loop taste. We could fill up the 12-pack with Earl Grey and be perfectly content!

While picking out flavors, we learned that CM's macarons are shipped all the way from France. You'll find French vanilla, French lemon, pistachio, raspberry and chocolate. After biting into our first flavor, we immediately learned that not all macarons are created equal. The shells are much harder and don't break apart as soon as you pick them up. Unlike most macarons, you could hear yourself biting and the texture was completely different. While the flavors were nice, nothing struck a chord with us quite like Bakery Lorraine. The pistachio was by far the creamiest and therefore one of our faves. 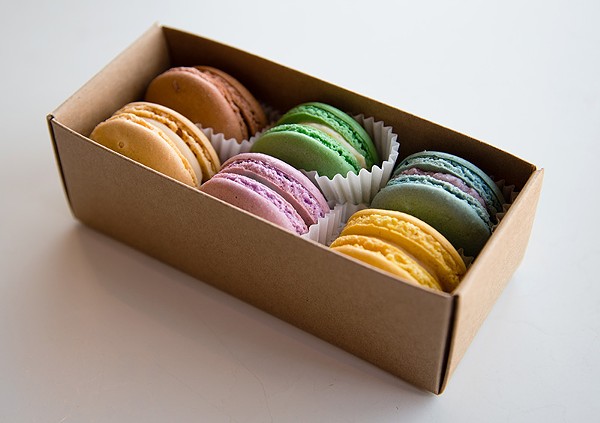 For the past four years, Delice Chocolatier has been mastering the craft of macarons. All of the treats are made in house with no artificial flavors. The classic raspberry, pistachio, blueberry and salted caramel were all there, as well as French blue lavender and the very unique, very thick guava. When you bite into the guava macaron, you taste actual pieces of the tasty, tropical fruit. After the arduous task of taste-testing macarons with similar flavors, guava was a nice twist. Every week, the salted caramel is traded out for an enticing, cinnamon dulce de leche macaron. All in all, Delice had the thickest macarons in SA. Based on our experience, the thicker the macaron, the more potent its flavor. 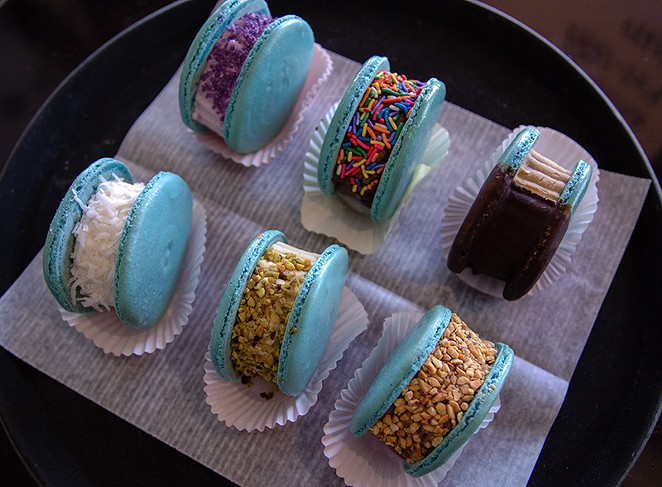 The final — and most flavorful — stop of the Tour de Macaron is at the Italian café Paciugo. No, we're not doing a gelato tour, but at Paciugo, French and Italian flavors come together to create the gelato macaron. Yes, gelato in between the two delicious macaron cookies. Inside a mini refrigerator rest vanilla macarons with various gelato flavors — violet, chocolate, mint chocolate chip, coconut, pistachio, chocolate hazelnut. Violet? Yes, please! A combination of the sweetest, most delicate, floral flavors of the violet gelato and the crunch of the macarons made these babies the ice cream sandwiches of our time. Also, you don't have to go with the premade gelato macarons. Go through the rows of gelato and spot out a flavor you're craving to pair with the French cookie.

Along with gelato macarons, Paciugo also serves up traditional macs. Our favorites? Rose, similar to the taste of the violet gelato and root beer, a flavor that takes you into the world of Willy Wonka where you can drink your food. Although Paciugo has been around for over seven years, they came out with macaronst this January and we couldn't be happier.

The Tour de Macaron was a success with each shop offering its own unique twist on the pastry. Go on a mac binge at Bakery Lorraine. Try out intense flavors at Delice Chocolatier or surprise your taste buds and go into flavor overload at Paciugo.

OK — time for some cardio.

Walker and Fierro blog for Twenty Something SA about the city's evolving lifestyle and entertainment options.