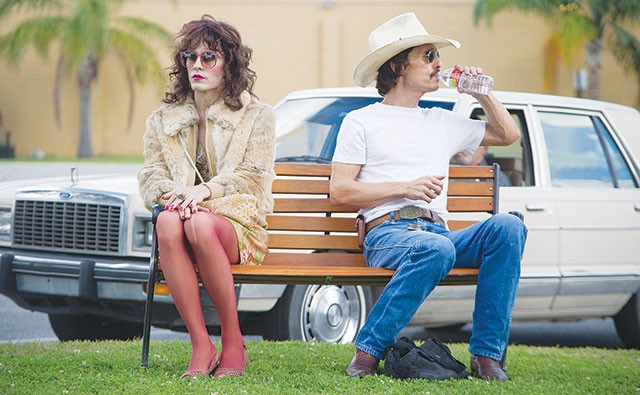 Wouldn't it be a wonderful world if all it took for assholes to become angels was a little adversity? Hollywood has a long tradition of advancing the notion that even the most flawed man can be transformed into a selfless crusader if exposed to just the right mix of personal tragedy and social injustice.

Throw in a “based on a true story” slugline and that's all you need to prove the myth of the exceptional man.

This is why Schindler’s List chronicled the horrors of the Holocaust through the eyes of an enlightened German and American History X confronted American racial violence through Edward Norton's reformed white supremacist. Movies like these tend to deify their protagonists, never investigating the complicated and often self-serving reasons for their change of heart. Instead, they convince audiences that inside of every callous, self-centered prick is a noble altruist waiting for an opportunity to emerge. All it takes is a little girl in a red coat or an Aryan rapist in the prison shower. Worse, they suggest that these tainted moral warriors possess a unique ability to right the wrongs of society. This explains why Clint Eastwood's righteous white male was the only person in Gran Torino who could effectively counter the gang violence that tormented his Hmong neighbors.

It's the 1980s, and though he's bone-thin and wracked with a horrible cough, it's inconceivable to this manliest of cowboys that he's contracted HIV. When a doctor informs him that he's got full-blown AIDS, with a T-cell count in the single digits and a life expectancy of 30 days, his response is exactly what you'd expect.

“I ain’t no faggot, motherfucker,” Woodroof hisses at Dr. Saks (Jennifer Garner). “I don’t even know no faggots.”

A hard-partying racist and homophobe, one thing Ron is not is stupid. With the handwriting on the wall he gets educated about the disease and discovers that his prescribed treatment, AZT, offers little hope for survival. This leads Woodroof to Mexico, where he finds success with experimental treatments.

Unfortunately, the drugs aren't approved in the U.S. Smelling both personal salvation and a unique business opportunity, he starts smuggling his unauthorized AIDS drugs into Dallas.

But how does a casual bigot earn the trust of the local gay community? Enter Rayon (Jared Leto), a street-smart HIV-positive transgender junkie. Ron reluctantly takes her on as his business partner, unaware that the virus that threatens his life is also now reshaping his worldview. What begins as a cynical survival and business tactic gradually becomes the kind of personal crusade that attracts Hollywood adaptations. Add to the mix that Ron is forced to perform an end run around hostile FDA agents and their entrenched support of the pharmaceutical industry by creating a members-only subscription service for afflicted clients, and you've got the makings of an Oscar-nominated drama.

At first,Vallée keeps the sentimentalism at bay, opting for a raggedy, matter-of-fact portrait of his highly flawed and accidental crusaders. Neither character is generous by nature, each angling for what serves their interests best. While the film's message of activism and tolerance is inevitable, it rarely compromises Woodroof's shrewd pragmatism for self-important posturing. Instead, it suggests that Ron's acceptance of the LGBT community was born from daily interactions rather than some hackneyed life-changing epiphany. Better still, his unlikely friendship with Leto's self-destructive Rayon is presented as bristly and complicated. Both actors are in especially fine form, bringing their characters' complex relationship with illness to vivid life. (The less said of Garner's unnecessary and ineffectual doctor character, the better).

But as the movie clumsily enters its homestretch, the temptation to turn rebellious Ron into a heartstring-tugging heterosexual hero of AIDS activism becomes too much for screenwriters Craig Borten and Melisa Wallack to resist. For all the subtlety and substance given to its two leads, Dallas Buyers Club makes the unfortunate mistake of casting the gay community as anonymous extras in their own struggle (much as Spielberg did to the Jews in Schindler's List). Other than Rayon, you'll be hard-pressed to identify another homosexual character. Only Vallée's deft direction and insistent focus on the resolve of its complicated outcasts keeps things grounded, reminding audiences that sometimes it is the desperate and despised who fight hardest to balance the scales of justice.