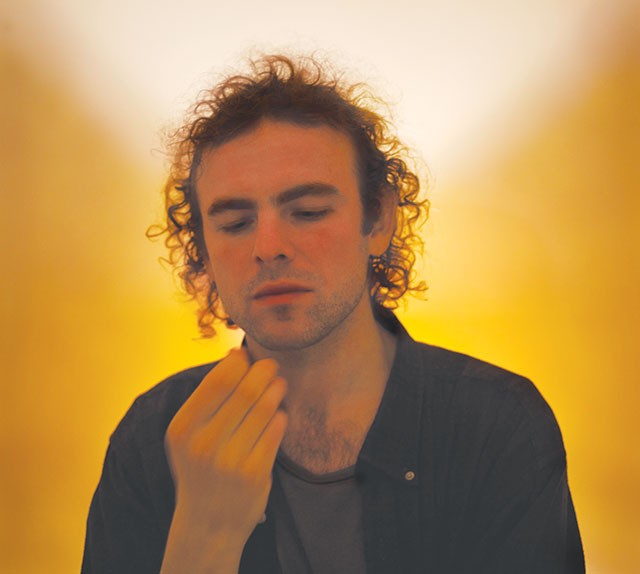 “The best way I can describe Love is as a cowboy worship record,” says Damon McMahon, explaining his newest output as Amen Dunes. “Literally, in, like, the character I aspired to as a little kid and cowboy worship [as] a way of being in the world.”

When I hear the phrase “cowboy worship” in music, the sound of Amen Dunes doesn’t immediately ring the cowbell, at least not in the way the bombastic work of Ennio Morricone’s spaghetti western soundtracks do. Love, the third Amen Dunes LP, sounds more underwater than set in the American West, its reverb-drenched instruments coming in waves of mantric repetition.

But Clint Eastwood’s Dollar Trilogy isn’t exactly the image of cowboy life that Love is trying to channel. “It’s music about beautiful failure, which has a long history in rock music,” McMahon continues. In that light, Amen Dunes’ cowboy portraits are closer to the stuff of Cormac McCarthy’s dark worlds or Jon Voigt’s character in Midnight Cowboy, churning forward in the face of perennial loneliness and failure.

Operating out of New York, McMahon has had some creative letdowns in past musical endeavors to inform Amen Dunes. Riding the hype of Interpol- and Strokes-style rock from NYC, McMahon’s prior band Inouk crashed hard. “It was in the age of excitement and money, in 2000 and ’01, and I blew my load on young musical expectations,” says McMahon. “I had a lot of good things happen and had it all fall apart and I learned that lesson early on. It really helps now ‘cause I know what not to do.”

In a complete 180-degree turn from the formula of revivalist post-punk, the music of Amen Dunes is wildly unique and structure-averse. It’d be damn hard to confuse McMahon’s current work with any other artist, except perhaps a slow, unreleased Neutral Milk Hotel tune. Like Jeff Mangum’s college radio-defining NMH material, Love is a sonically dense record, despite being driven by acoustic guitar. The complementing instruments—French horn, vibraphone, sax and violin—are carefully poised to blend into the washed out guitar, never distracting from McMahon’s simple, notable melodies.

“We went up to Montreal and recorded it with some of the guys from Godspeed You Black Emperor!,” says McMahon. “We had four people in the studio at a time and a lot of those elements are still on the record. There are rough mixes with multiple string parts, cello parts, extra guitars—a whole shitload of stuff.”

But listening to the polished result, little of that maximal mindset comes through. “It’s totally stripped down,” says McMahon. “I listen for what is necessary. And what’s the most resonant. Not literally, but figuratively. You can tell when a part is just not necessary.”

As his best album yet, Love is something simultaneously dear and aloof to McMahon. He described Amen Dunes content as “always about self and being human or non-human.” Confused, I asked him to expand: “You’ve got your obvious self and all your extended selves. It could be literally that kind of connection to another self in the form of a character I’m singing about, or a reflection on the past.”

In writing and performance, McMahon separates himself from the “non-human” identity of Amen Dunes. “It’s definitely not me,” says McMahon. “I try to ultimately separate myself from that. Because if you make yourself too much like your art and performances I think the music and performance becomes a little more bullshitty. You get your ego super wrapped up into it. Because how interesting am I? Not very much. Anybody, any musician, they’re just normal people.”

Whatever self is at the helm, Love is an incredible piece of work. Album-opener “White Child” kicks off with an eye-opening pair of out-of-rhythm guitars, shortly settling into Arcade Fire-contributor Colin Stetson’s barry sax, stomping drums and the record’s strongest melody. On “Lonely Richard,” over Velvet Underground-style strings, McMahon drops barfly advice on the title character, singing “have yourself a good time,” only to switch to a more sage expression: “you’ve known yourself for all time.” A passionate record, Love is loner music with a sense ofcosmic connectedness.

On display at the final Mondo Nation pop-up show this summer, Love’s long rhythms and McMahon’s arresting voice help bring the music to a meditative headspace, a place McMahon considers to be richly creative. “I think I have to get to that place before making music, or it happens simultaneously,” he says. “I definitely make music to quiet my mind.”