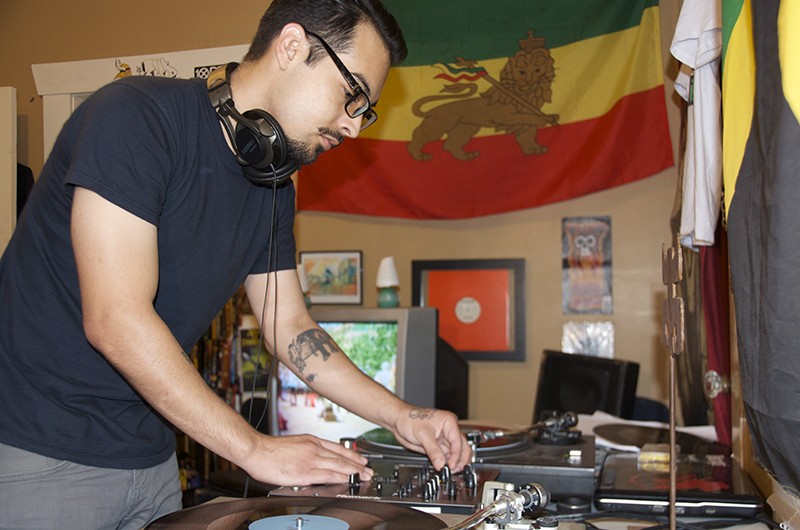 The bedroom on the cover of Four Hands' début cassette Home is lit from two sides by a naked lamp and a TV screen broadcasting white static. There are familiar signs of home life around them — posters on the wall, a rug on the floor — but the eye is drawn upwards, as if the ceiling were giving way to a hermit's grotto, nestled in a cave.

Listening to the eight tracks on the tape, it's easy to hear them as a soundtrack to evenings spent alone and up late, the disembodied voices of familiar ghosts riding on sinuous rhythms. It's a remarkable début from San Antonio producer Josh Lucio, who, along with his co-conspirators in the bass collective Sub.Culture, translates private experiences into some of the most singular dance music in the city.

"I'm a really shy person with bad anxiety", Lucio told the San Antonio Current, nursing a beer on the patio of Big Hops on Broadway the week before Home's release party at Ritual Art Gallery.

"I don't talk to people much, so to vent I'll work on tracks whenever I'm bummed out or maybe had a little bit to drink," Lucio noted. "I was going through a rough time last year and the only thing that kept me sane was music, whether it was making it or listening to my records."

Those records reflect Lucio's love for the low-end continuum of the UK's reggae heritage, particularly the garage- and dub-influenced 12-inch singles that documented the beginnings of dubstep in the mid-to-late '00s. He cites London vets Skream and Pangaea as major influences, though he reserves his deepest love for Finnish duo Clouds, whose single "Elders" introduced him to dubstep. Indeed, the Four Hands handle is a tribute to one of their song titles.

Lucio's early immersion in punk laid the groundwork for his intuitive approach to producing. The self-reliant ethos of these bands, coupled with the anarchic insights of skateboarding, showed him that "there were no actual rules as long as you were passionate about it. Similar to skateboarding, you just do what ever feels natural to you."

This freedom is reflected in his self-taught approach to production. Lucio still produces on a cracked version of the software FruitLoops and, aside from an occasional mix reference on a sub-equipped PA, he mixes everything on his laptop. Everything is done in tune with instinct.

Which brings us to the story of Sub.Culture. Lucio is one of six members, including childhood friend Aaron Peña (who produces as OOH YEA) and Mexicans With Guns' Ernest Gonzales, all of whom aim to facilitate a wider degree of deep-frequency culture in the conservative sonic climate of the Alamo City. Humble to a fault, Lucio is quick to give props to his collaborators.

Though Home came out on Gonzales' Exponential Records, all members chipped in to have it pressed; several took care of the album's mastering duties. It's an egoless arrangement, the kind that facilitates healthy scenes and collapses the insular bubbles that can choke a city with cliques, something Lucio and his confers have little time for.

"I'm more focused on how much sound system culture and the underground bass community has been flourishing," said Lucio. "Mad Classy in Austin, Gritsy in Houston ... they're bringing some of the best producers and DJs from overseas while nurturing talent in their own backyard. It's very inspiring."

In a follow-up email, I asked Lucio's take on dubstep's prospects these days, living as we do in the aftermath of Skrillex and other ex-metalheads reducing it to hypermasculine wobbles and moshworthy drops. He remains optimistic.

"I think in the States 'real' dubstep is finally considered dubstep", he wrote. "I'm definitely having an easier time explaining the sound to people than when I started listening to it around 2009. Most of the kids on the 'aggressive robot sex' bandwagon finally jumped off and moved on to EDM and festival trap music. I'm not really worried about it anymore."

Regardless of labels or specters of success, music remains Lucio's conduit to cohesion, on a very personal level.

"I believe every person is essentially two different people," he said. "I think I'm a good example of that. During the day is the person you see at work interacting with others, running errands and doing normal day to day things, but when I can finally be alone the other person comes out — the one that doesn't have the pressure to impress anyone or force polite small talk with random people just to amuse them. The person that can just be, you know?"