Dancing with Sasha: An Exclusive Inside Look at Sasha Velour's Smoke and Mirrors from Partner Johnny Velour 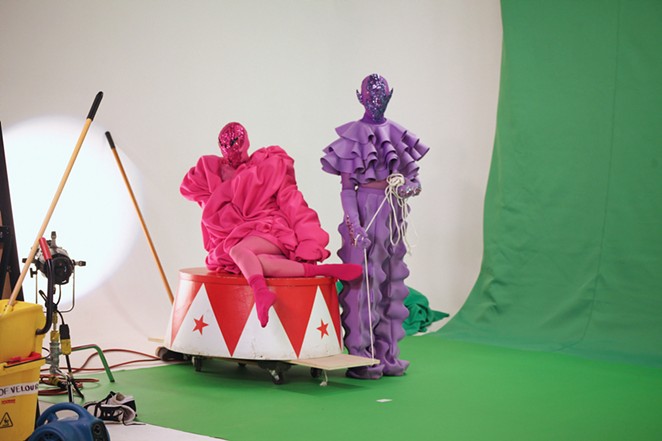 RuPaul's Drag Race winner Sasha Velour is no drag diva. Her latest tour may be a one-queen shindig, but it's still a celebration of community and collaboration. To bring her complex concepts to life, she's built a drag family of sorts, notably including elegant costumer Diego Montoya and her partner, cheerleader and stage manager extraordinaire Johnny Velour.

The first time Johnny saw Sasha perform in New York City, he knew she had the "it" factor.

"It was like 50 degrees in the room, there was no light, and Sasha had 200 freezing, grumpy New Yorkers enraptured in the dark her first time performing ever in this city. I knew she was doing something and tapping into all of our collective consciousness in a way that I’ve never seen anyone do before."

The two founded House of Velour together, a multimedia company that encompasses their various ventures, from the drag-themed magazine Velour to long-running drag revue Nightgowns.

Soon after the first issue of Velour — then called Vym — debuted in 2015, Johnny began traveling for a long-term gig, and Sasha's mother Jane Hedges passed away from cancer.

"It was bad timing," Johnny says, "but it became the reason Sasha Velour is the way she is. Why she’s an empathetic artist, who’s very deep and likes to think about things really fully. [The show Nightgowns] became a way for her to exorcise her grief and work through it. That’s when her drag took its true form."

The monthly theatrical showcase Nightgowns was the first time Sasha produced and performed drag regularly on her own, and led her to develop a close-knit community of performers in New York.

"That’s why her drag is so communal, I think, because of the way Nightgowns happened, and the timing in which it happened," Johnny notes.


After winning RuPaul's Drag Race, Sasha's career kicked into high gear, allowing her to take her drag performances to new heights. She had long been integrating live projection mapping into her lip synchs, but suddenly she had access to a whole new level of resources, which she took full advantage of while developing her genre-bending solo drag showcase.

According to Johnny, "a lot of the stuff in Smoke and Mirrors was rough ideas and iterations of stuff that we didn’t quite have the time — because we were both working full-time jobs — or resources to really fully execute. She’s gotten to really go through her whole repertoire and recreate and really do what she’s always imagined she wanted to do."

"Even a number in Smoke and Mirrors is something that she first did a million years ago, and was designed for a screen that was only five or six feet wide. Now we’re doing it on a screen 20 feet wide," he adds.

Johnny provides key support for Smoke and Mirrors as the show's stage manager. That means he makes all the behind-the-scenes calls for the elaborate constellation of lighting, sound and video cues during each performance.

"It’s weird. Being a part of this one queen show has satisfied all of my love for ensemble work that I had when I was a chorus dancer onstage, because when you’re working on a one queen show — if you’re doing the spotlight or you're stage managing and calling the lights and stuff like that, as it were, like I do or you’re doing wardrobe or you’re working on the deck — it’s so intimate because it all happens so quick.

"We’re all dancing together and creating this thing together as we go along — all working to support her and to support her artistic integrity and her vision. It’s an amazing group effort, and it’s great to get to work with people in that way and feel like though we’re not on stage we get to dance with her and shine with her in a way."


Johnny didn't just dance metaphorically for Smoke and Mirrors. He is a key player in one segment of the show, a rendition of Annie Lennox's "Keep Young and Beautiful," which he describes as "kind of a little biting piece of satire."

The number features video projection of three dancers, each of whom embodies a physical facet of Sasha's drag persona — bushy eyebrows, pointed elfin ears and vampire fangs. The costuming, which includes two layers of masks, renders the performers essentially blindfolded, and Johnny was ultimately the only person who could pull it off.

"There were three of us ready to do the number, and then by the time we had the mesh masks on and the paper masks on over that, everyone was feeling a bit overwhelmed," he said.

"But I spent my entire 20s performing in music theatre as a dancer, so I was like, 'I’ve done more challenging things than this, so I know I can handle this.' So I just said, 'Everyone take off your costumes, I’ll do them one by one on the green screen, and we’ll have them piece it together.' It was really fun because I got to embody different personalities that I’ve seen in Sasha, and that was a really fun, special way for me to be involved in the show."

Ultimately, the communal effort behind Smoke and Mirrors allows Sasha to create an atmosphere of belonging that also envelops the audience. Over the course of the performance, she takes the audience on a rollercoaster ride, from the heights of "spectacular spectacularity" that drag fans know and love to solemn moments in which she holds the viewers in the palm of her hand.

"At the end of the show she stands still for seven minutes, and people walk out in tears," Johnny says.

"I don’t know anyone else who can do that. It’s because of her attentiveness and her devotion to making you feel something."