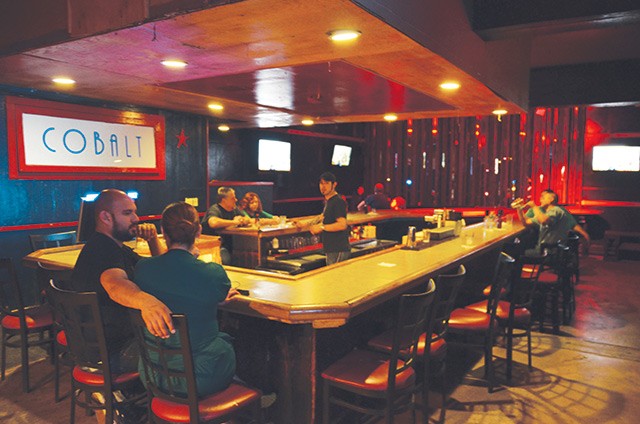 For some, enjoying a bourbon and Coke is relegated to happy hour once the sun is set and the workday is done, and not a minute sooner. But what about the nocturnal set, the scrub-clad hospital nurses, techs and other medical personnel who slave away through the wee morning hours only to find just about every bar within the vicinity has closed its doors by 2 a.m.? Well, for those few there’s Cobalt Club.

The bar sits inside an otherwise non-descript building save for its exterior powder blue paint job. I spent two years living down the street from Cobalt, driving by every morning, wondering about and, let’s face it, passing judgment on the dozen or so vehicles parked outside the bar. Who needs to drink that early?

As it turns out, plenty of bar-goers frequent Cobalt in the around sunrise. Joined by Current music editor Matt Stieb, I stopped by the bar early Wednesday morning … and I do mean early. While at first it did seem strange to roll in at 7:30 a.m. and order a Bloody Mary, I wasn’t alone—Cobalt patrons really do come in right when the bar opens at 7 a.m., just as the vinyl tarp hanging on Cobalt’s exterior advertises.

As bartender Mario Hendricks pointed out, mornings are the bar’s busiest with happy hour, yes, happy hour, running 7 a.m. to 2 p.m. Can you really object to $2.50 wells, $2.50 longnecks and $4 premium spirits? Hendricks, who’s worked at the bar on-and-off since it first opened its doors in 1999, said regulars are mostly nurses. Sure enough, these health care workers know how to end the night, or morning, congregating in lively clusters over wells and a ciggy or two on the bar’s teensy back patio.

There’s not much for décor, but who needs that stimuli at 7 a.m.? A dark blue color tints the walls, while red accents and borders help give it some contrast. The Cobalt’s actually quite spacious—there’s a smattering of tall tables on one end, but the bar itself takes up a huge portion of the room. Two dart boards and a pool table anchor the left side of the space, along with a standard jukebox that played an eclectic mix of Whitney Houston’s “How Will I Know,” Vicente Fernandez’s “Volver, Volver” and finally Beyoncé’s “Partition.”

On Sundays, to abide by those silly and outdated TABC rules, Cobalt serves up a buffet of sorts from 10 a.m. to noon. Don’t ask me what’s on the menu, Hendricks really couldn’t tell me either, but at least you won’t have to drink on an empty stomach.

I announced my day-drinking activities on Facebook after my visit and so-called “friends” balked—“I have heard a rumor you can still be classy as long as you don’t drink any hard liquor before noon…” That very well may be, but I won’t be hatin’ next time I drive by on my way to work.