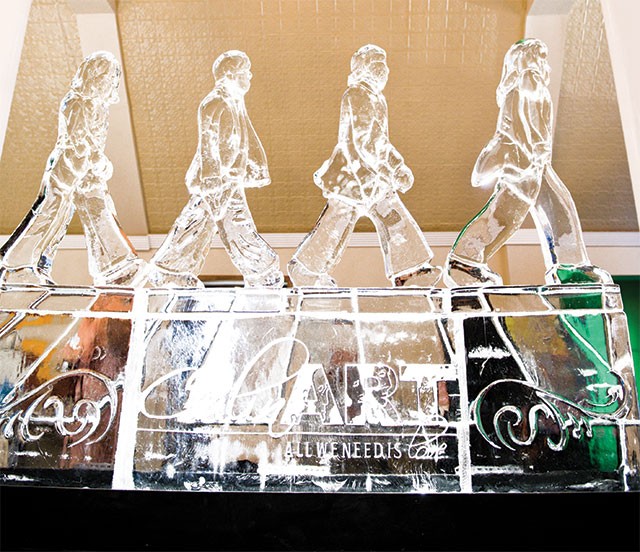 The use of sculpted ice for decorative and functional display purposes during celebrations hearkens back to the Middle Ages, when meals and banquets thrown by the wealthy featured sculptures made from edible ingredients. (Are you thinking what I’m thinking? Three words: mead ice shots.)

The glorious tradition of ice décor has carried through, with culinary schools and master sculptors teaching the craft. Sean Leahy, owner and sculptor of Full Spectrum Ice (fullspectrumice.com, (512) 560-2340) in San Marcos, is a National Ice Carving Association (NICA) certified professional and educator who apprenticed with Ice Visions in Saint Louis, Mo., while earning his degree in studio art from Webster University. That apprenticeship turned into a full-time position and, after six years with Ice Visions in Missouri, Leahy and his wife relocated to San Marcos in 2010, where he opened his own shop that serves San Antonio, Austin and Central Texas.

An essential component to the ice carving process is, of course, the ice. Sculptures require large, clear blocks that typically come from Clinebell machines, which slowly freeze water over a period of days to avoid the impurities caused by air-bubbles—think Bohanan’s ice versus the opaque, rapidly-frozen ice from your freezer. Leahy’s Clinebell machine produces 20- by 40-inch blocks of ice that usually measure between 9.5 and 10 inches thick.

Leahy begins by designing a shape on his computer. He enlarges and prints the design to actual size on large paper for use as a template on the ice. Working inside a 12-degree freezer, he traces the shape onto the block with an end mill drill and then takes to the ice with a chainsaw for large chunk removal. Ornate details, interior curves and text are created with chisels, drills and other tools, and heat from hair dryers or irons is sometimes applied to smooth out rough surfaces. The entire process takes a few hours, depending on shape and size of the sculpture.

Color is added with LED lights or by introducing dyed sand, paper, paint, gelatin or even objects like flowers into the ice while it freezes. “Using light allows the ice to keep its natural qualities, like clarity and shine, that people are really drawn to,” Leahy told the Current. “It really helps to make [sculptures] pop.” He packs the completed pieces, which maintain their detail for several hours at room temperature, in insulated boxes for delivery.

Single block sculptures run from $350 to $450 on average and, for the right price, your next party could even feature a multi-block ice bar with built in “drink luges,” which Leahy can artfully disguise with opaque ice. Keep it classy, San Antonio!