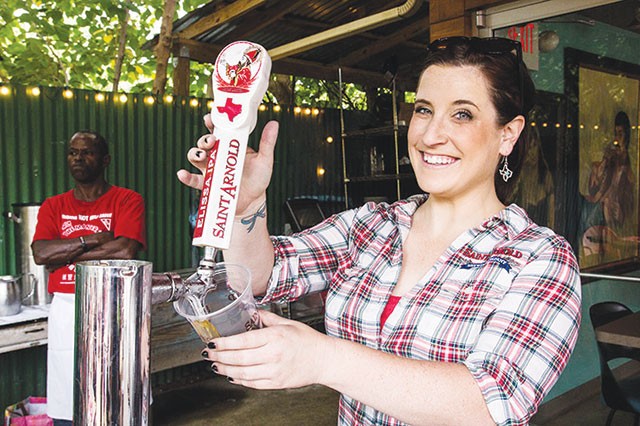 Since 1994, the Saint Arnold Brewing Company has produced year-round, seasonal and single-batch craft beer. Available today in four states (Texas, Louisiana, Florida and Colorado), the company is headquartered in Houston but has an army of brand representatives stationed across their footprint: four in Houston, two in DFW, one in Austin, one in Colorado, one in Florida, one in Louisiana and one right here in San Antonio. Enter Nicole George.

George started in San Antonio sales and marketing for Saint Arnold and now covers all of South Texas. She spends her days spreading the Saint Arnold gospel, which can mean anything from bringing samples and information to restaurant and bar owners to tracking how the product is moving in stores, communicating with distributor Silver Eagle, coordinating donations and sponsored events, and even visiting existing accounts for lunch. “Sometimes,” she said, “I wake up in the morning and think, ‘How cool is it that this is my job?’”

A Corpus Christi native, George moved to San Antonio to join the Saint Arnold team in September, 2012. Her interest in the food and beverage industry began early, thanks to an uncle with a three decade-plus career in wine. The ball (widget?) really got rolling while she attended Texas State University.

With a growing interest in craft beer, George took to Twitter, following industry “tastemakers” and communicating with other beer aficionados online. When someone from Rahr & Sons Brewing Company in Fort Worth reached out to her, she seized the opportunity. “I thought maybe he could be my mentor, so I emailed him saying I was interested in getting into the business.” That connection led to part-time contract work with the company and gave her the foothold she’d been seeking in the craft brewing community.

George is the Lone Ranger (or “beer cowgirl,” as she said, laughing) in SA for Saint Arnold and the only full-time brewery rep in San Antonio, but she usually has the opportunity to interact with her peers from other brands when they come to town. “It’s definitely friendly competition,” she said. With so many different styles of beer, however, “it’s not competition of who is better, but which brewery will fit the bar or restaurant.”

Though pinning down her single favorite brew proved as impossible a task as a parent picking a favorite child, George pointed to IPA as her favorite style, with amber ales, Belgians and the Saint Arnold Christmas Ale getting nods, as well.

As a female beer representative, George is definitely in the minority. “You have to be very assertive and confident,” she said. “Sometimes I feel like I have to overcompensate and prove that I know more about beer and brewing and the industry.” George continued, “It’s definitely a boys club and I’m happy to be a part of it.”