Day in the Life: Urbanist Design 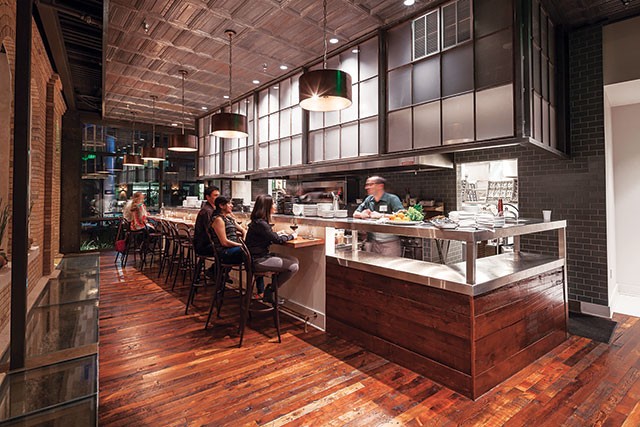 Arcade Midtown Kitchen, Cured, Local Coffee: What do these Pearl fixtures have in common? Thanks to Urbanist Design, the three share some aesthetic and structural DNA.

Urbanist Design is an architecture, planning and design firm based in the Full Goods building. At the helm is founding architect Jonathan Card, who spent 10 years at Lake|Flato before branching out on his own. He focused on mixed-use developments, urban infill and the Pearl/River North area toward the end of his LF tenure. “I sensed there would be opportunity for smaller projects,” he said, explaining that when a major development such as the Pearl “slams into a neighborhood, it disrupts the edges and creates openings for additional growth.”

Two full-time architects now comprise the Urbanist team, which works out of the Pearl; Card hired architect Marc Toppel in August 2013, another LF alum who most recently worked for Douglas Architects.

Card estimates that Urbanist’s portfolio is split more or less evenly between commercial and residential, with hospitality and restaurant projects comprising some 40 percent of the overall workload.

Each of Urbanist’s restaurant projects comes together differently. “It’s a very collaborative process that takes place between the building owner or user and architect,” he said, “and it’s all very organic, with blurry lines. That’s why we have contracts: to outline who’s responsible for what.”

He pointed to Local Coffee as an example of a user-driven project: “[Owner] Robby Grubbs had a strong vision for the space,” Card said. While Urbanist and Giles-Parscale (a design, marketing and branding firm) both had a significant input, “our job was to augment and manifest [Grubbs’] vision; to bring in the technical know-how and be a sounding board,” Card explained. In contrast, Card served as design lead “with a lot of other people weighing in, but trusting us to lead them,” while working with Chef Steven McHugh on the newly opened Cured.

Urbanist’s hallmarks are what Card calls “moments” that stand out from each of his projects—the commanding, custom-built meat case at Cured; the garage door window at Arcade that opens up via the bar to a beautiful outdoor view.

The firm works with restaurants and bars in less visible ways, too, through conducting feasibility studies. Intended to help building owners understand how a space might be utilized or to aid restaurateurs scoping out potential locations, Urbanist studied the Pearl locations that Blue Box and The Granary now occupy. Urbanist also helped conceptualize the Taco Land renovation, laid out the space for Green Vegetarian and worked with Saveurs 209 before the restaurant landed in its Broadway home.

Stay tuned for Urbanist’s next project. “We’re working on a concept called Tacos and Tequila, ‘TNT,’ in the Mosaic Building on Broadway,” Card said. Tasty—and good-looking—things ahead.