by Lea Thompson and Ben Olivo, The San Antonio Heron 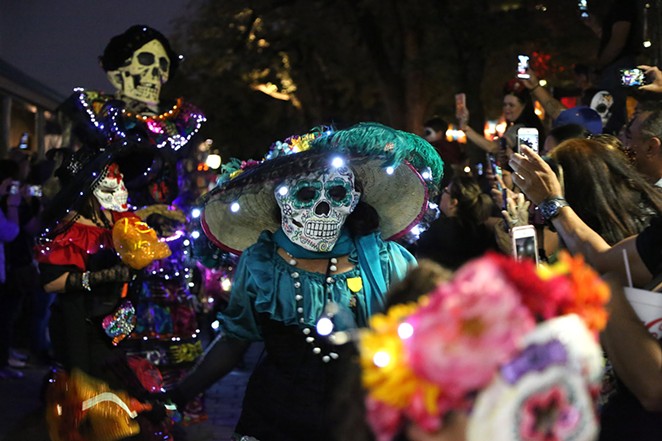 La Villita has been home to one of the city’s biggest Dia de los Muertos celebrations, Muertos Fest, for the better part of a decade, but a new city-sponsored event series — Day of the Dead San Antonio (DODSA) — is poised to take its place.

Though not without controversy.

DODSA’s champion, celebrity chef Johnny Hernandez knows that the new event series will ruffle a few feathers among local cultural organizations who have longed observed the Mexican tradition and have a problem with the city backing what’s being called a “Fiesta-fied version” of Dia de Los Muertos. However, it’s being done with the best of intentions, he maintains.

Hernandez’ Grupo La Gloria recently signed a 49-year lease for Maverick Plaza in La Villita, which is currently closed for renovations. Javier Ruiz-Galindo, a longtime event organizer and DODSA’s president and CEO, approached Hernandez with the idea for the event more than six months ago, before bringing the mayor and Visit San Antonio on board.

The main DODSA celebrations will take place at La Villita from November 1-3, with events that include choreographed dancing, artist-designed skulls, kid-friendly crafts, live music, food and beverages that celebrate the city’s UNESCO gastronomical designation plus a river parade.

Hernandez declined to reveal the total DODSA budget but said it would run six figures.

The November 1 river parade will include 16 colorful trajineras, or river barges, along the River Walk, and will culminate with a performance of “La Danza de Las Mojigangas” at Arneson Theatre. ABC affiliate KSAT-TV will use a 22-camera setup to syndicate the three-hour parade, though organizers declined to discuss the number of markets that plan to broadcast the event. DODSA’s citywide event schedule will also include events such as a 5K Race for Life.

DODSA promises to bring new revenue and attention to San Antonio and could change the way the city celebrates over coming decades, but some locals — especially cultural arts groups — say they feel left out of the evolution of Dia de Los Muertos celebrations.

“I think it will be Fiesta-fied. They’re going to have a 5K race, because everybody knows how relevant 5K races are to the Day of the Dead,” said Jon Hinojosa executive director of at SAY Sí. “The city and Visit San Antonio should remember those cultural arts organizations as much as they are going to spend promoting this new event.”

Hernandez’s contract with the city includes plans to build three future restaurants at the currently closed Maverick Plaza, a site that previously hosted the bulk of Day of the Dead celebrations. The plaza will formally reopen in 2021.

City council approved the lease to Hernandez’ Grupo La Gloria in December 2017, and the company signed the deal in May. An operational and programming agreement between the city and Grupo La Gloria has yet to be inked, however.

For this event, the city is waiving facility rental fees at La Villita, which it does regularly for other cultural events, such as A Night in Old San Antonio, Fiesta Noche de Rio and Taco Fest, the city said through a spokeswoman.

DODSA also can request reimbursement up to $50,000 for certain expenses associated with the event, which would be paid from the Inner City Tax Increment Reinvestment Zone coffer.

Hernandez’s party arrives as its predecessor, Muertos Fest is being relocated to Hemisfair after six years at La Villita.

In its new location, the two-day Muertos Fest will be able to handle an ever-growing number of attendees, expected to surpass the 60,000 it hosted in 2018. Organizers cited its growth as the reason for its relocation from La Villita, although DODSA will be using sections of the 1.3-acre La Villita for its own festivities.

“Moving to Hemisfair gives us more room for the community altars, which are the heart and soul of Dia de los Muertos,” said Jim Mendiola, Muertos Fest’s artistic director. “As our event grows, I’ve seen families come back to build altars year after year, creating their own family traditions.”

Where much of Mexico and San Antonio once celebrated Día de los Muertos at home or gathered at the gravesites of loved ones, the holiday has become a source of interest outside of Latin America and the Southwest.

The commodification of Day of the Dead began years ago and continues to grow via popular entertainment such as the 2017 Pixar film Coco and global celebrations in cities including London and Moscow, observers point out.

But, for local arts- and performance-based organizations such as SAY Sí and Urban-15, the new Day of the Dead event at La Villita threatens to overshadow a foundation of cultural understanding that’s been built over decades.

Students at SAY Sí have collaborated with Mexican artists to create sculptures similar to those being commissioned by the city, executive director Hinojosa points out. He said hopes the city-backed Dia de los Muertos festival is rooted in education.

But from what he’s seen in the promotional materials so far, he’s not holding out much hope.

The City of San Antonio has helped DODSA coordinate events inside La Villita and also is providing parade seating next to the Henry B. Gonzalez Convention Center. Meanwhile, DODSA organizers have independently commissioned over 50 craneos, or decorated sculptural skulls, along Houston Street, in addition to some from San Antonio artists, which will be displayed at La Villita.

Catherine Cisneros, co-founder and artistic director of Urban-15, laments that the city looks to be joining in the commodification of the holiday.

“I think San Antonio has been instrumental in making this commercialized version that’s been happening,” she said.

However, there are additional opportunities for local groups to participate, according to DODSA’s organizers.

La Villita will host up to 10 official altares on-site, with ofrendas dedicated to local icons including Bunny Becker, Lila Cockrell and Dr. Chiscano, who passed away this year. Hernandez also invited San Anto Cultural Arts, a local youth art nonprofit, to decorate one of the sculptures displayed on Houston Street.

Though the commercialization of Day of the Dead is inevitable, the public celebrations may foster respect for often-misunderstood events, said Ezequiel Peña, director of Our Lady of the Lake University’s Center for Mexican American Studies & Research.

He said its higher profile may draw a new audience that hasn’t gravitated to the celebration before.

“We have this collective need for grief, and in these public spaces we can do that,” Peña said.

While there will be tributes to the dead at the La Villita celebration, there will also be plenty of food and libations. The event will spill along Alamo Street in front of Guadalajara Grill and extend all the way to the end of Nueva Street, near the closed Maverick Plaza.

If all the cross-marketing sounds like overkill, organizer Ruiz-Galindo said that’s because he hopes the Day of the Dead celebration becomes an Alamo City hallmark.

The celebration of departed loved ones is something that can be understood by everyone, he added. The close succession of celebrations — Día de los Muertos in the Americas, All Saints Day in Europe and Halloween — are often blended together, but the right events can correct cultural misconceptions.

“I think that’s should be the goal for everybody as it grows in La Villita, in Hemisfair,” Ruiz-Galindo said. “It’s already in the South Side and the West Side, but we are all part of San Antonio. We should all be celebrating.”

But Hinojosa of SAY Sí says the city-approved party doesn’t acknowledge the hard work others have put into making sure Alamo City residents understand their own culture well enough to celebrate.

“The frustration is, don’t call something new and [say it’s] never had happened before. Don’t say that’s going to change the dynamics of Day of the Dead, when there has been work happening at culture arts centers for decades,” he said. “Don’t forget us when you are looking at things through an equity lens.”

Whether people congregate around neighborhoods, organizations, churches or events, Day of the Dead celebrations are happening, and it’s important that they represent San Antonio’s heritage, Hernandez said. The chef is currently working on a kid-friendly Day of the Dead storybook, expected to publish next year.

“San Antonio needs to celebrate Day of the Dead in their own way, whatever that it is.”


Editor's Note: A previous version of the story misstated that the city helped to commission craneos for Houston Street; DODSA organizers independently commissioned the art from Mexico.