Dead End: The Standoff at Sparrow Creek Starts Strong But Doesn’t Live Up to Its Efficient Setup 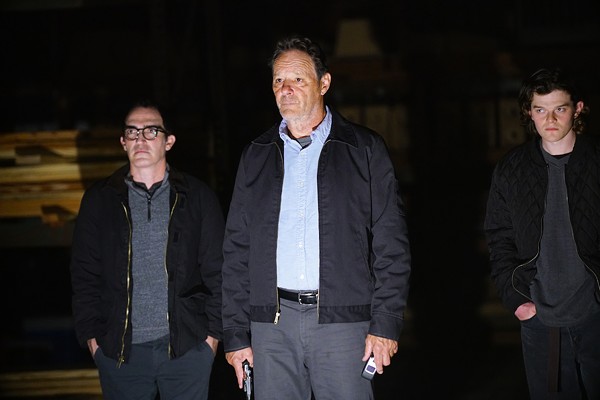 Give some credit to first-time screenwriter and director Henry Dunham on his attempt to make a steadily paced thriller reminiscent of Quentin Tarantino’s debut film, 1992’s Reservoir Dogs, without falling into some of the cliché trappings most novice filmmakers might deem enticing.

In The Standoff at Sparrow Creek, Dunham’s focus is on his characters and the interactions they have with one another throughout the film’s short, 88-minute runtime. Leading the all-male cast is actor James Badge Dale (Shame) as Gannon, an ex-cop who is now a member of a local militia group in rural Michigan that is not shy about their distaste for police.

Gannon and the rest of his fellow militiamen are called to meet one evening at their secret headquarters inside a lumber warehouse when they learn that a mass shooting has just taken place at a cop’s funeral. After slowly piecing together what occurred, the seven men realize that one of their assault rifles, grenades and other gear is missing from their arsenal. This, of course, leads everyone to believe a member of their own militia is responsible for the shooting.

With his law enforcement background, Gannon becomes the de facto investigator of his own crew and begins to interrogate each of the men to find out their alibis and whether they had anything to do with the killings. This includes Morris (Happy Anderson), an ex-Aryan Nation terrorist, and Keating (Robert Aramayo), a young recluse who never speaks.

As a writer, Dunham proves to have a way with words as he matches Gannon up against each of the men in different areas of the compound. In some cases, it’s a battle of the minds. In others, it’s all about which man can puff his chest out more. Either way, Dunham keeps the exchanges tense, although when the aforementioned Keating finally does open his mouth, his long-winded monologues are too clever for their own good. The dialogue-driven narrative stays grounded for the most part, but Keating’s ramblings are pretentious and overwritten.

Where The Standoff at Sparrow Creek falters the most, however, is in its third act, which should have been the beneficiary of the strong buildup that came before. Unfortunately, the film veers off into a jumbled story with flashbacks and a litany of twists that aren’t nearly as interesting as Dunham would have audiences think.

Save for the impressive photography by first-time feature film cinematographer Jackson Hunt (he’s shot four Beyoncé music videos), any real consistency in The Standoff at Sparrow Creek is lacking from start to finish. There’s nothing wrong with finding inspiration from the best, but someone needs to tell Dunham to quit when he’s ahead.

The Standoff at Sparrow Creek is available on VOD platforms on January 18.